The World’s Smallest Pacemaker Can Be Implanted Without Surgery

The U.S. Food and Drug Administration has approved an injectable pacemaker that doesn’t require wired leads, which often lead to complications. 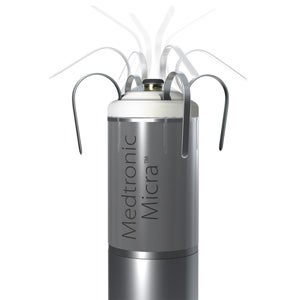 The one-inch long Medtronic-built device, called the Micra Transcatheter Pacing System, is about a tenth the size of traditional pacemakers—making it the smallest in the world.

It’s intended for patients with atrial fibrillation (an irregular or rapid heart rate) and other dangerous arrhythmias, including bradycardia-tachycardia syndrome. The FDA approved the device in light of a Medtronic clinical trial involving 719 patients who were implanted with the device. After six months, around 98 per cent of the patients experienced adequate heart pacing. A small fraction (7 per cent) of patients experienced major complications, such as cardiac injuries, device dislocation, and blood clots.

Conventional pacemakers, which are surgically implanted, require wired leads that run from the pacemaker to an implant located just below the collarbone. These leads run through a vein directly into the heart’s right ventricle, delivering electrical impulses to treat irregular or stalled heart beats. The problem with these wires, aside from the clunkiness of it all, is that they sometimes malfunction. They can also cause problems when infections develop in the surrounding tissue, requiring a surgical procedure to replace the pacemaker. 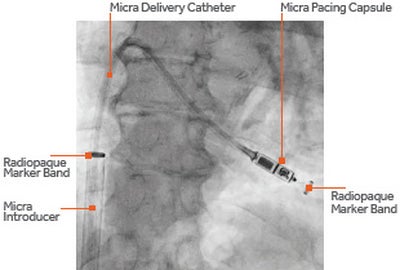 Micra doesn’t use wired leads at all. The device latches onto the heart using small hooks, where it delivers electrical pulses that keep the heart beating more regularly. The device is implanted through a thin 41-inch-long (105 cm) tube inserted into a vein in the patient’s groin. It travels through the vein, making its way to the heart’s right ventricle. Micra only paces the lower chamber of the heart, so it can’t be used for patients who need pacing in both the upper and lower chamber.

“As the first leadless pacemaker, Micra offers a new option for patients considering a single chamber pacemaker device, which may help prevent problems associated with the wired leads,” noted the FDA’s William Maisel in a press statement.

The FDA said it shouldn’t be used for patients who already have implanted devices, as they could interfere with pacemaker function. It also can’t be used for people who are severely obese, or who are intolerant to materials in the device or the blood thinner heparin.