The quest to build the world’s most energy-efficient buildings largely plays out in temperate regions or in big, heat-generating cities. That’s what makes this new building in Colorado so impressive: It’s located at high elevation in a location that gets about 90 inches of snow per year—yet, amazingly, it uses no central heating at all.

The Rocky Mountain Institute (RMI) is an environmental advocacy group that’s devoted to sustainability, so it’s probably not surprising that the nonprofit would want to build a structure that epitomiwes its values. Founded in 1982, RMI’s Innovation Center recently moved to a new location along the Roaring Fork River in Basalt, Colorado. This is definitely high country. RMI’s property sits at an elevation of 6,600 feet. And although the site gets plenty of sun—about 242 days per year—winters are snowy and cold, with average nighttime lows of -15 degrees Celsisus. That’s the reason Basalt is surrounded by famous ski areas like Aspen and Snowmass, which is actually where the architects looked for inspiration.

“It’s a very Colorado solution,”said Justin Brooks, lead designer for ZGF Architects. He encouraged me to think about the building like a skier sitting down for an après drink at a sunny bar at the end of the day. “If you’re wearing a down jacket that’s highly insulated on the back, you can still sit outside and enjoy a beer.” 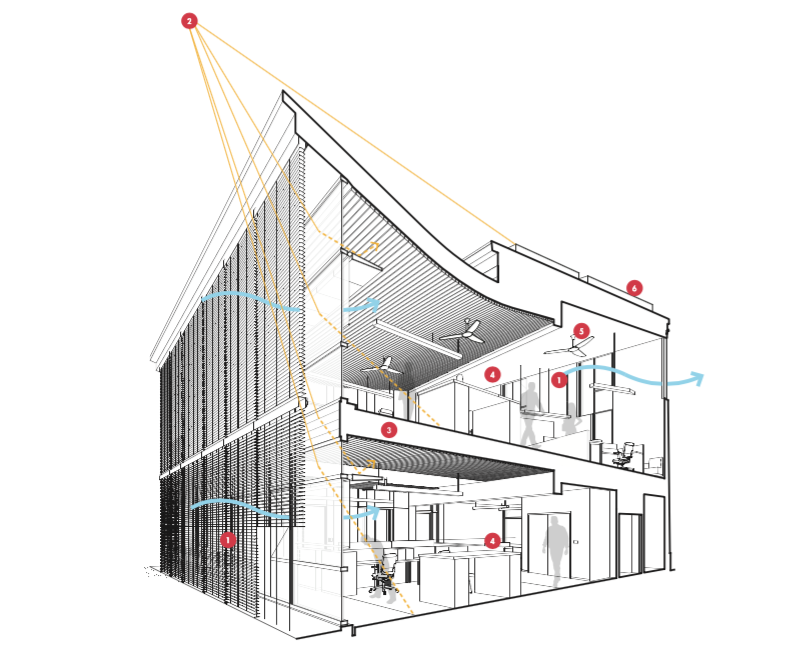 How RMI stays warm and breezy: 1) Airflow through the shades; 2) Natural light from above; 3) Thermal mass held in the concrete floors; 4) An open office plan helps with ventilation; 5) Temperature moderation through fans; 6) Solar panels on the roof

The reliably sunny days are the number-one heat source in the Basalt climate, so the team began by maximizing passive solar gain on the south side of the building—the one that would get the most sun exposure.

The windows themselves are high-performance quad-pane glass, two of which are simply films that help trap thermal energy. And large exterior sunshades which collect data from weather sensors installed on the building are used to help moderate temperature and control glare. (Again, think of the skier metaphor—these are the goggles.)

Once the team had picked the structural components, ZGF’s architects and RMI’s scientists began modelling the plans to test energy efficiency, and that’s when they realized something amazing: The building might not need to use a central heating system. “We saw we could bring the heat to where the people are,” says Brooks. “Not the other way around.”

The same solar gain that heats the building could make life miserable for those inside, so workstations are situated away from the window, but there are still places to enjoy the natural light

In addition to thick concrete slabs—which Brooks describes as a “thermal battery”—and a wax plastic material in the drywall that solidifies at certain temperatures to help to store or release heat, there is a radiant heating system in the floors, but RMI has not needed to use it yet. Instead, there are a series of small, low-voltage electric mats installed under the carpeting in workstations that can be turned on individually, like heated seats in your car.

The building is so effective that interior temperatures have only reached about 60 degrees, even on the coldest nights winter nights. The pipes don’t require any freeze protection because the building’s envelope is so solid that there is not much heat loss. “I often find myself forgetting that it’s a state-of-the art net-zero energy building until I see our exterior sunshades automatically going down to guard the building from solar heat gain on hotter afternoons,” says Kelly Vaughn, marketing manager at RMI. “It’s a very visual reminder that we are quite literally being heated by the sun!”

The building also has a fascinating structural story: It uses cross-laminated timber (CLT)—the wood product of the future—and the pine was sourced from trees killed by beetle infestations (which is sadly a big problem in nearby forests).

Visual cues like those kinetic sunshades were important to the design team. They wanted to make sure that the building’s biggest energy-saving features are not only visible but explained to show how the building works. That’s why there’s a mandate to share the building’s information publicly using signage throughout the building to educate both employees and visitors. A dashboard on RMI’s website shows current energy-use data and has a list of the building’s features. There’s also a detailed breakdown of costs and explanations for why pricier investments will pay off down the line.

The building catches about 90 per cent of rain and snow that falls on the roof. Local sandstone that references the red cliffs of nearby peaks ties the structure to its natural environment.

RMI’s headquarters is likely the most energy-efficient building ever constructed in this type of extreme climate, but the building is the same size as about 90 per cent of all commercial buildings in the US. So if the team could achieve this kind of performance here, that should be more than enough inspiration for architects to achieve similar goals anywhere else in the country. “A key point of the building is that the design elements that make it beautiful are what allows it to perform,” says Brooks. “The building its intended to uplift, to help inform, and to teach.”