Why are We Turning Our Favourite Foods Into Rainbow-Coloured Nightmares?

Recently, it seems like food dye is making a comeback in a big way, and not just one dye — all of them. Rainbow coloured bagels, cheese toasties, pizzas, and even lattes have circulated the internet as the latest food trend. Is it just harmless novelty, or is there more to these culinary monstrosities?

Studies show that colour not only plays an important role in how we taste, but can itself suggest flavours to our brains that aren’t necessarily there. Culture has a lot to do with which flavours we gravitate toward: people in most regions largely associate black with bitterness; green suggests sourness in the UK but sweetness in India. “More often than not, we taste what we see,” Charles Spence, a professor of experimental psychology at Oxford, told Gizmodo over email.

Each colour suggests some flavour, and those combinations aren’t just culturally dependent; they’re also personally subjective, as shown by a 2008 study on orange Smarties. Colour cues and assumptions about colour/flavour associations are separate but equally strong in tricking your brain into inventing tastes out of thin air. 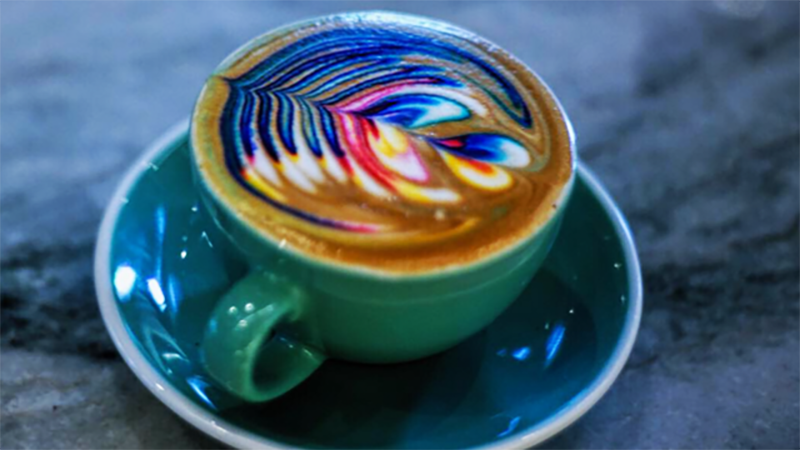 But what about foods that have every colour, like the aforementioned latte? Spence was unaware of any research done specifically about rainbow-coloured foods, but he proffered a guess: “If I combine colours that make me think of strawberry, orange and cherry, who knows? Perhaps you might get enhanced sweetness.”

Colour variety might also make us eat more. A 2014 review in Appetite found that more colour keeps us from getting bored of eating the same food. The more frequently we are exposed to a food, the less appealing we will find it. That might explain why some of the most pedestrian foods are getting the rainbow treatment. For most people, a coffee, bagel, or slice of pizza is a daily or weekly food item that’s lost its lustre through repetition.

Why is this taking off now? “I would say it is the natural result of [a] playful approach to deconstructing food,” Spence said. “Thinking about eye-appeal as essential part of enjoyment translated to mass market.” But is rainbow food going to be around forever? No. It’s a fad like any other — and if it did become a fixture, it’d become as bland as the non-dyed stuff that it provides an alternative to. But in the meantime, take a bite and see what tastes different about it.