There’s one big drawback to Apple’s thin, svelte laptop: once you pull the trigger on a Macbook, you’re generally stuck with the specs for life. So when a company claims to offer an idiot-proof SSD upgrade, it’s worth checking out.

OWC’s new Aura SSDs are designed to replace the stock SSDs in 2013-or-newer Macbook Pros and Airs. Unlike the processor and RAM, which are soldered onto the Macbook’s logic board, the solid state drive is accessible through a bunch of screws. Why don’t more people change the drive out? Well, it’s a custom-sized part with a proprietary connector, so a standard laptop SSD would be useless.

The drive also comes with a sweetener: an enclosure for the old SSD, which lets you turn it into a beautiful (and blazingly fast) external drive. The kit also includes two tiny Torx screwdrivers, which OWC claims is all you need to swap the drives out.

Without really reading the instructions, I dove into replacing the drive on my 2015 13-inch Pro. I’ve built my fair share of desktop computers, but I’ve never opened up a Macbook before. It turned out to be pretty simple: unscrew the ten minuscule screws that hold the base of the laptop on, pop your fingers behind the back plate, and pull.

Once the cover is off, you’ve got access to the logic board, and all the components sitting on it. The SSD is held in by one screw: undo it, and all it takes is a little pressure to pop the SSD out. Putting the new drive is was a cinch—it takes a little force, but feels exactly like installing a stick of RAM into a desktop.

Reassembly is just the reverse procedure, although I did manage to fuck up a little—turns out two of the screws are ever so slightly shorter than the others, and if you put them in the wrong holes, they’ll all stick out.

I tried the same install in a 2013 13-inch Macbook Air, and a 2014 11-inch, with almost exactly the same results. The only difference was the location of the SSD, but even so, installation was still a breeze. 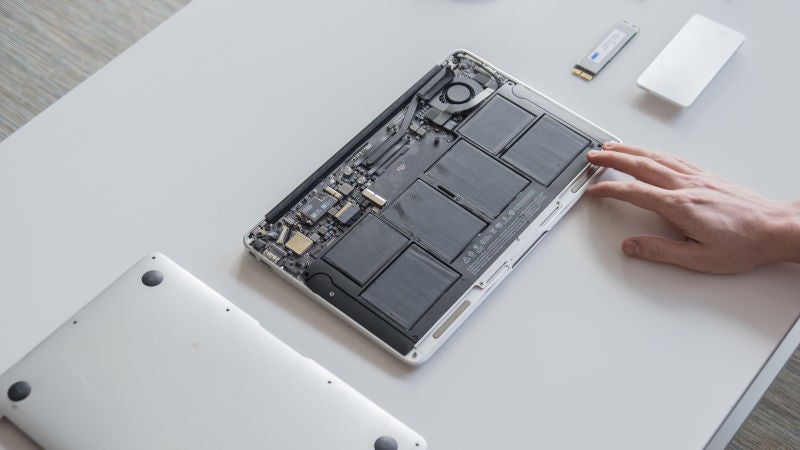 Once you’ve put the software in, you will need to do a little messing around with software in order to set the new drive up. There’s a few good options: if you want a fresh install of OS X, you can use a bootable USB to do a new installation. I chose to install my old SSD in the supplied enclosure, plug that into my laptop, and then boot from that external drive. Once I was up and running, I used the normal OS X installer to set up the OS on my shiny new SSD.

When the installation is said and done, you probably won’t notice you have a third-party drive in there. I clocked the OWC SSD at 670MB/s read speed and 433MB/s write using BlackMagic. That’s on par with Apple’s previous-gen laptops, but the current generation Macbook Pro uses a fancier SSD that’s twice as fast. Unless you copy gigantic files from Thunderbolt drives regularly, I doubt you’ll notice, but it’s worth bearing in mind. With OWC’s drive, you’re trading a little performance for a lot of extra space.

A side note: the enclosure for your old drive that OWC supplies is probably the best part of the deal. It looks exactly like a Macbook accessory designed by Apple, and thanks to the SSD inside, it’s way faster than any external drive has the right to be. It should also be bombproof: I’ve destroyed more external hard drives than I can count over the years, but this drive has no moving parts, and is hewn from two solid pieces of aluminium.

The only true downside is price. 1TB SSDs can easily be found for less than £200 these days, and regular ‘ole external hard drives are even cheaper than that. Sure, $600/£459 is way less than a new Macbook, but you have to really need the storage to be internal to justify dropping the cash. However, if you’ve got the money, one working hand and five minutes of spare time, OWC’s drives are hands-down fantastic.