Nuclear experts say this famous photo of an apparent mushroom cloud rising above the city of Hiroshima is not what it appears to be. The towering plume is actually billowing smoke rising up from the raging firestorms that followed the explosion.

This photo has been misidentified as a mushroom cloud for decades. The Pulitzer Prize winning book from 1986, The Making of the Atomic Bomb, described it as “the mushroom cloud over Hiroshima,” and it’s the first thing that visitors see at the Hiroshima Peace Memorial Museum, which identifies the scene as the “Hiroshima (atomic) strike.” The Associated Press referred to the image as a mushroom cloud as recently as two weeks ago.

But as The New York Times reports, the image has been gravely misunderstood:

“This is not a mushroom cloud,” said Richard L. Garwin, a noted bomb designer and longtime adviser to Washington on nuclear arms.

Kevin Roark, a spokesman at the Los Alamos weapons laboratory in New Mexico, which made the Hiroshima bomb, known as Little Boy, said the image showed “a smoke plume from the fires that followed.”

So it’s just smoke from the aftermath, despite so many years of being identified as otherwise and the watermark on the photo.

Note the watermark in the lower righthand corner. (Image: US Army)

Military experts say the cloud and its dark shadow can be seen as a kind of sundial that suggests when an American plane took the photograph. John Coster-Mullen, an expert on the Hiroshima bomb, put the time as just before noon — more than three hours after the strike on the morning of Aug. 6th, 1945.

The towering plume, he said in an email, “is most definitely not the original mushroom cloud, which had long since dissipated.”

Mr. Roark said the cloud, if it were nuclear in nature, would be larger than the one resulting from the most powerful bomb the United States ever detonated, which was a thousand times stronger than Little Boy.

At the time of the bombing on August 6th, 1945, Hiroshima’s houses were primarily constructed of timber with tile roofs, and many of its industrial buildings were also built around timber frames. The city as a whole was highly susceptible to fire damage. The bomb generated fire storms that raged for hours. 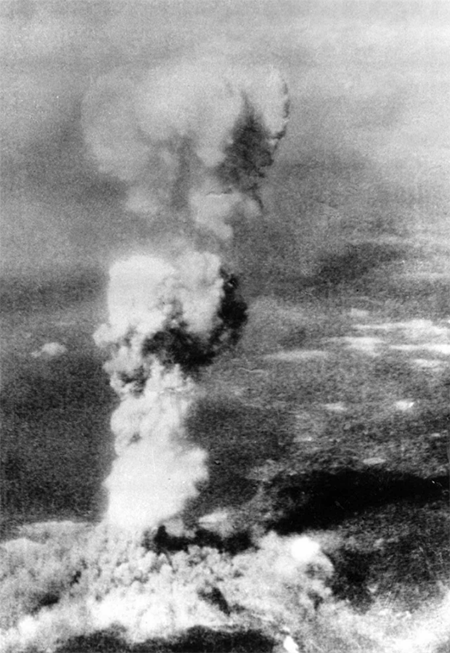 The resulting cloud, though mushroom-like in appearance, was far too large to be produced by Little Boy, an atomic weapon with a blast yield of 15 kilotonnes. What’s more, the “pyrocumulus” cloud, lingered for hours, whereas mushroom clouds dissipate within about an hour.

Recently, the wildfires that swept through Fort McMurray in Alberta, Canada, produced a cloud that bears a striking resemblance to the one at Hiroshima. This cloud, called a pyrocumulus cloud, created its own weather, and even produced lightning. All that said, there are no words that can express the terror that events like an atomic blast or catastrophic wildfire these create.