Nanomachines could revolutionise technology and modern medicine, if only we had viable power sources to make them move where we wanted them to go. Now scientists at the University of Cambridge have built the world’s tiniest engines, powered by light, as described in a new paper in the Proceedings of the National Academy of Sciences.

Dubbed “ANTs” (for actuating nano transducers), these itsy-bitsy devices could one day realise the vision of the 1966 classic film Fantastic Voyage, in which a miniaturised submarine crew travel through the body of an injured scientist to repair a blood clot in his brain—except there would be no need for shrunken human pilots. Like real ants, these nano engines can produce very large forces relative to their weight, according to lead researcher Jeremy Baumberg.

It works a bit like a spring mechanism. At the heart of the device are lots of charged gold nanoparticles, held together by a polymer gel that responds to changes in temperature. The gel is heated by zapping it with a laser. The polymer gel responds by expelling all its water in a fraction of a second and collapsing, much like coiling a spring. This stores elastic energy as the gold nanoparticles are smushed together into tight clusters.

As the device cools, the gel will re-absorb water to expand just as quickly, releasing that stored energy to push the gold nanoparticles apart with tremendous force. 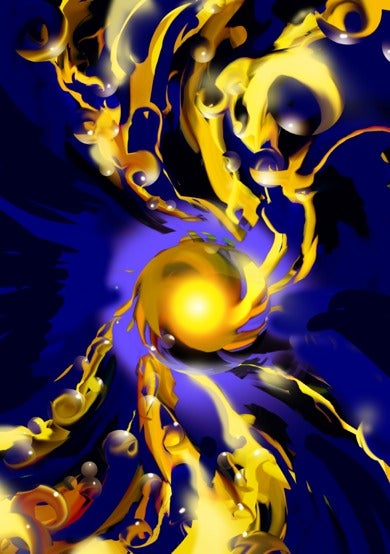 Lead author Tao Ding likened the effect to an explosion. “We have hundreds of gold balls flying apart in a millionth of a second when water molecules inflate the polymers around them,” he said in a statement.

That explosive effect is due to so-called Van der Waals forces between molecules. These forces are usually not significant in our everyday lives, but very small micro- and nano-scales they are tremendous. Geckos are able to scale walls so easily thanks to billions of tiny hair-like structures on the bottoms of their feet that can sense those forces.

The ANTs convert energy from the molecular attraction between heavy metal particles into elastic energy to create a kind of nano-spring—a true transducer. But to make a bona fide actuator, the researchers need to figure out how to focus the forces—which currently push in every direction—into something more akin to a piston in steam engine.

While the prototype device uses gold nanoparticles, any dense metal could be used, including silver, nickel, or copper. “The gold is nice because it gives us a colour, which can be used to infer the separation of the nanopartices,” Baumberg told Gizmodo. “It is like a ruler, on the nanometre scale.”

As for real-world applications, the ANTs could indeed power tiny nanobots someday for things like targeted drug delivery or robotic surgery. In the short term, the Cambridge team is tackling the far simpler goal of making tiny light-controlled pumps and valves for better microfluidic chips—the sort used in diagnostic kits and biosensors. “No electric wires would be needed, so we could put many on a small chip,” said Baumberg.

[Proceedings of the National Academy of Sciences]