A new application, System and Security Info, developed in part by German security researcher Stefan Esser, will tell users if their phone has been jailbroken, which could help people discover if they’re being secretly spied on. This is a big deal for obvious reasons. Smartphones carry the most intimate details of our lives: photos, Google searches, location data, private messages, reading preferences. So of course there’s a cottage industry dedicated to developing software that secretly spies on you through your phone.

Some of these spyware vendors, like HackingTeam, peddle their products to government agencies and law enforcement around the world. Others, like mSpy, bill themselves as a way for parents to keep meticulous tabs on everything that happens on children’s phones. Spying is easier on Android phones, but getting around Apple’s famously strong security is near impossible. So all of these apps rely on one thing to work: iPhones must be “jailbroken.”

Some of the surveillance tools offered by mSpy. Source: mySpy.com

Jailbreaking an iPhone modifies the device so that it can run software that hasn’t been approved by Apple. It’s a pretty straightforward process and can be done in about 20 minutes. The software needed to jailbreak an iPhone is also readily available online. 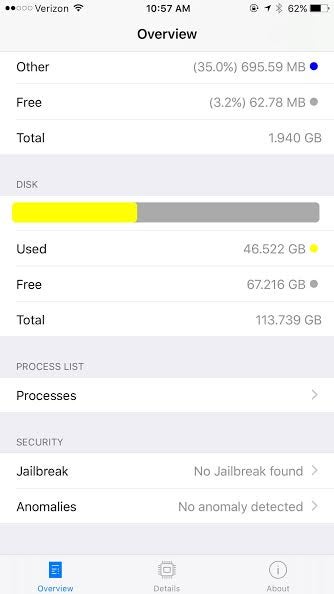 Screenshot from System and Security Info

“The biggest motivation behind [this app] is that these companies like FinFisher or HackingTeam that are selling iOS spy software to government and others, they usually require [their clients] to only use jailbroken phones,” Esser told Gizmodo. “So the idea behind that is whoever is trying to spy on someone needs to get physical access to the device, jailbreak it, and then they can run the spying tools from HackingTeam or FinFisher.”

Hiding the fact that a phone is jailbroken, Esser says, is as easy as deleting one file.

The new app from System and Security Info is simple, though. In the jailbreak tab, it shows a breakdown of files that would indicate that your iPhone has been jailbroken. If everything is green, you’re in the clear.

Just because your phone has been unknowingly jailbroken doesn’t mean that someone has secretly installed a spying tool that would allow someone to monitor your location and emails in real time. But it’s certainly a reason to be suspicious.