This Candidate for US President Claims He's Travelled Through Time

If the current frontrunners in this year’s presidential race just don’t appeal to people, perhaps they would like to really think outside the box. Seattle lawyer Andrew Basiago is also running for president, as an independent. And he cites his extensive experience travelling through time as one of his strongest qualifications for office.

That’s right: a candidate for the highest office in the USA is a self-professed time traveller—excuse me, “chrononaut”—who used his access to this secret technology to advise past presidents. He also claims to have teleported to Mars in the 1980s along with a young Barack Obama (who naturally is part of a government cover-up to keep the American public from learning the truth).

And Basiago swears he’s going to win: “I have prior knowledge that not only will I run for president, but that during one of the elections—which would have to be between 2016 and 2028, because I’m not running past that—I’m either elected president or vice president.”

Basiago announced his candidacy last December during an appearance on the syndicated radio show Coast to Coast, to very little media fanfare. But he first came forward in 2004, with the news that he had been the first American child to teleport back in 1967. He’s been lurking on the fringes, lobbying for the declassification of so-called “Tesla teleportation,” ever since.

He also believes in aliens and Bigfoot. Per the Huffington Post, if elected, Basiago will “disclose how extraterrestrials are visiting Earth and discuss the ramifications of the advent of ET-human contact within the first 100 days.”

It’s a plot worthy of a classic scifi B movie. His father, Raymond Basiago, was an engineer with the Ralph M. Parsons company, allegedly involved with “Project Pegasus,” a CIA intelligence program that used children to test various time travel and teleportation technologies. Basiago claims to have made his first “jump” at the age of six, teleporting from New Jersey to New Mexico. 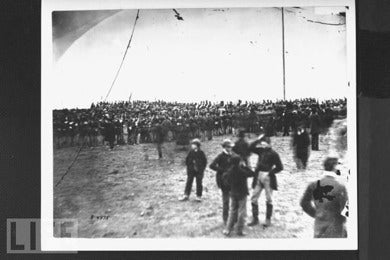 US Presidential candidate Andrew Basiago believes he is the little boy pictured in the forefront of this famous 1863 photograph of Gettysburg by Josephine Cobb. Image: Records of the Chief Signal Officer, 111-B-4975

Among the highlights of Basiago’s time travelling exploits: hearing Abraham Lincoln’s Gettysburg address first-hand when he travelled back to 1863 at the tender age of 10.

And just what were these top-secret technologies with “quantum access capability” that made such feats possible? Basiago claims there are two versions: one that lets you physically travel through time (courtesy of Nikola Tesla’s secret papers), and another—dubbed “Chronovision”—that works more like a hologram or magic mirror, enabling you to connect with a time or place (past or future) without being physically present.

Writing at Inverse, Neel V. Patel cast about desperately to find a positive spin to all this crackpottery, and decided it makes Basiago the most tech-friendly candidate the current American election cycle. “The only real suspicious thing about Basiago’s campaign is that it’s starting as he wraps up work on a book he hopes will be a best seller,” he concluded.

Really, dude? That’s the only suspicious thing? Not the fact that any self-respecting physicist will tell you that there’s no such thing as “quantum access capability” and that time travel to the past is pretty much impossible? Never mind the fact that NASA/JPL actually has a rover on Mars right now, and there’s been no sign of advanced alien life forms on the red planet. And honestly, someone who has travelled to the year 2054 should probably know for sure what year he will be elected, and to which office.

If you really feel like delving into the crackpottery, the folks at Exopolitics ran a two-part “investigative” piece in December asking the burning question: “Is Basiago a heroic whistleblower disclosing the existence of extraterrestrial life and secret space programmes, or part of a CIA sanctioned psychological operation to manipulate the disclosure process?” Just bear in mind that this is also the site breathlessly warning us last week that “Reptilian Aliens Helped Nazi Germany Build Secret Space Programme in Antarctica.”