This Piece of Paper Can Diagnose Zika Incredibly Fast

Researchers have demonstrated a paper-based device that can detect the Zika virus within two to three hours. It’s affordable, effective, and practical for widespread use—particularly in countries with underdeveloped healthcare infrastructures—and it’s also capable of telling the difference between Zika and other mosquito-borne diseases, including dengue and chikungunya.

As the Zika virus continues to ravage parts of South and Central America, healthcare workers are having a hard time knowing who’s infected and who isn’t. Developed by researchers from Harvard University’s Wyss Institute for Biologically Inspired Engineering, this new device, could help solve this problem. They describe the device in a new paper just published in Cell.

Current tests involve taking a patient’s blood sample, and it can take days or weeks for the results to come in. What’s more, these tests, which hunt for the presence of certain antibodies, can’t discern between Zika and dengue. This is a problem, especially since because Zika has now been proven to cause birth defects in newborn babies.

To develop the kit, the researchers leveraged a similar system they developed to detect the Ebola virus. Inside a cartridge, tiny strips of paper are embedded with a synthetic gene network that sense disease-causing microbes, among other things. 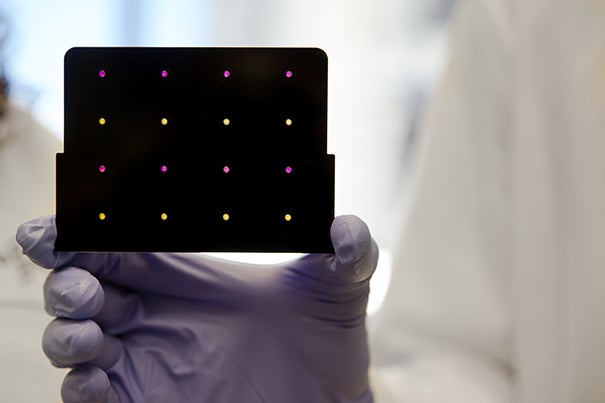 This black cartridge contains the paper-based diagnostic for detecting Zika. Areas that turn purple indicate samples infected with Zika, while yellow areas indicate samples that are free of the virus. (Image: Wyss Institute at Harvard University).

Genetic circuits are equipped with dozens of genes, and include a batch of proteins capable of deciphering the information contained within. The system is analogous to the way computer programming works; together, the genes and proteins carry out a task. In this case, it’s detecting traces of the Zika virus.

Once the process starts, the paper changes colour when a chosen target, like a specific sequence of RNA, is present. The diagnostic tool can screen for traces of the virus in blood, urine, or saliva samples. More work is needed to ensure the safety and efficacy of the tool before it’s deployed to the field, but the researchers say they’re not far off.

“The vivid images in the news stemming from the ongoing Zika crisis are heartbreaking,” University of Toronto pharmacologist Keith Pardee, a co-author on the paper, said in a statement. “We hope a tool like this can help reduce the impact of the outbreak until a vaccine can be developed.”