Welsh Bees Attack Car That Drives Off With Their Queen

Bees are dying at an incredible rate, and we’re all screwed because of it. But instead of thinking about all that doom and gloom, why not take a look at these photos of a massive swarm stuck to some poor woman’s car in Wales and thank your lucky stars it wasn’t yours.

The BBC reports that a swarm of bees in the Welsh town of Haverfordwest descended upon an innocent Mitsubishi Outlander on Sunday. The buzzing party was spotted by Tom Moses, a local park ranger, who called it a “big brown splodge”. He stopped to help because, as he put it, “bees need our help and I worried that some idiot would come pour boiling water over them or something stoopid!”

According to the Telegraph, the car belonged to 65-year-old Carol Howarth, who said the swarm decided to park itself on her car while she drove home from a nature reserve. She told the paper she had “never seen anything like it”, which sounds like the right way to describe an enormous swarm of roughly 20,000 bees!

Moses eventually called the local apiarist brigade, which came to sort out the issue. According to Roger Burns, who works for the Pembrokeshire Beekeepers, the swarm might have been trying to run after its almighty leader, the queen bee.

“We think the queen had been attracted to something in the car, perhaps something sweet, and had got into a gap on the boot’s wiper blade or perhaps the hinge,” Burns told Metro.

In fact, Howarth drove home after the incident on Sunday, thinking the problem had been fixed. But on Monday, the bees were back, and she had to call the beekeepers again for help. 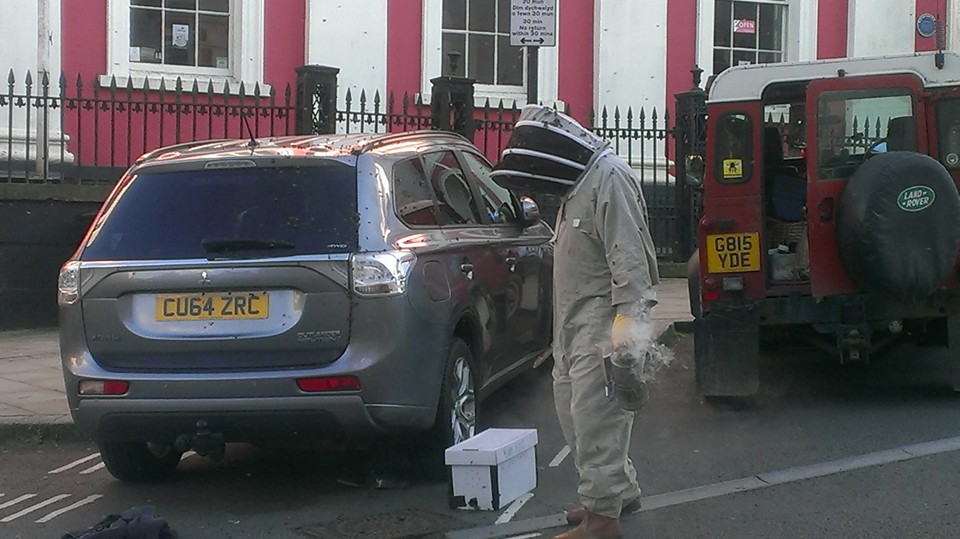 “Apparently bees can swarm at this time of the year and it is a very strong instinct for them to follow the queen,” she told the Telegraph, though the beekeepers apparently never located the poor queen.

Burns, however, found the whole thing quite funny. “I have been beekeeping for 30 years and I have never seen a swarm do that,” he said. “It is natural for them to follow the queen but it is a strange thing to see and quite surprising to have a car followed for two days. It was quite amusing.” That’s not really how I would describe a gigantic swarm of bees, but this is a guys who loves bees, after all. At least they’re having fun instead of dying. [Metro and Telegraph]