Newborn infants are supposed to be capable of imitating our facial expressions, like sticking out our tongues and opening our mouths. A new study in Current Biology suggests there’s no actual imitating going on—and that it’s all in our heads.

Parents are just going to have to accept the fact that this long-held truism about newborn behaviour may actually be false. Those awesome things that your awesome baby is doing—well, they’re probably not getting it from you, and the data proves it, thanks to a study led by Virginia Slaughter of the University of Queensland. After studying the behaviours of over 100 babies over the first nine weeks of life, she’s now recommending that we modify or abandon the theory that imitation is a latent capacity of human newborns.

It’s been long assumed that imitation starts almost immediately at birth, which has influenced theories about human social cognition and learning. But evidence to support this claim is mostly anecdotal, and actual studies done on the subject have produced mixed results. 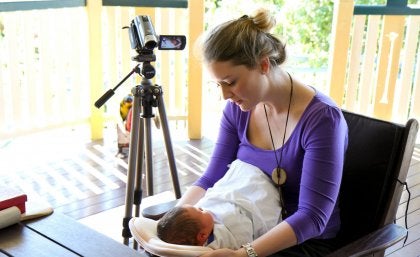 Looking to finally settle this question once and for all, Slaughter and her colleagues presented a total of 106 infants with a variety of facial expression, gestures, or sounds created by both human and non-human models. These behaviours included tongue poking, mouth opening, finger pointing, happy expressions, and sounds like “mmm” and “eee.” Each baby was tested at one, three, six, and nine weeks of age. The babies were exposed to each gesture for a full minute, while the researchers watched for a reciprocal response.

Over the course of the study, the researchers failed to find any evidence that the newborns were capable of copying these gestures, movements, or vocalisations.

The most common gesture exhibited by the babies was tongue poking, which they did in response to a number of other gestures. Turns out that tongue poking...is just what babies do.

“The results provided evidence against the view that certain human behaviours are innate,” said Slaughter in a statement. “Analysis indicated infants were just as likely to produce gestures in response to other stimuli as to matching models. Human children in later stages do copy others’ actions, but the controversial assumption that this occurs from the moment of birth needs to be rethought.”

So what’s going on? One possibility is the “observation selection effect,” a cognitive bias in which we unconsciously choose to ignore the things we’re not looking for, while only noticing the things we are looking for. In this case, we don’t notice or acknowledge gestures that are not imitations—but we certainly notice behaviours that are apparent imitations.

Another possibility is that the babies aren’t imitating us—we’re imitating them.

“When we interact with babies...we want to bring them into our world,” said Slaughter in an ABC News article. “We imitate them, and when we imitate them, this stimulates them to behave. We continue to imitate their behaviour and this sets up a reciprocal interaction that looks like imitation and that ultimately becomes imitation but is driven by the parents or the adult’s behaviour rather than the baby copying what somebody does perfectly from birth.”

But not everyone is convinced. Elizabeth Simpson from the University of Miami told ABC News that many of the modelled actions are rare or absent in newborns. “If an infant is unable to produce a given action, then of course she will be unable to imitate it. This isn’t a fair test,” she said. Simpson also believes the researchers didn’t give the babies enough time to respond.

This debate is far from settled. Parents probably won’t stop making silly faces at their babies, nor should they. It’s undoubtedly good for the baby to get all this attention. Just don’t delude yourself into thinking you’re being reflected back.

Jaws at 45: The Scenes, the Sounds, the Shark

Specsavers Nominates Everyone for the "Should've Gone to Barnard Castle" Joke