Infant With Brain Growing Outside His Skull Saved By Pioneering Surgery

Bentley Yoder was born with his brain outside his skull. Doctors said he didn’t have a chance, but he not only survived—he thrived. Now, some seven months later, Bentley has undergone reconstructive surgery to move his brain back into his skull. 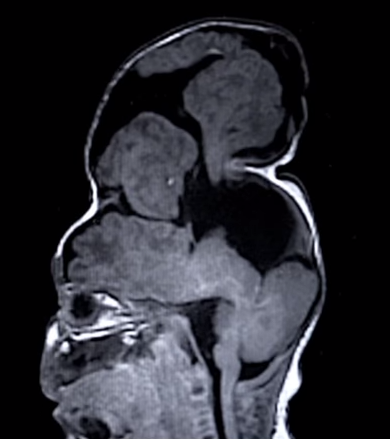 A brain unlike no other. (Credit: Boston Children’s Hospital)

Bentley’s parents, Sierra and Dustin, both 25, found out something was wrong when they went in for a routine ultrasound at 22 weeks. Still in the womb, he was diagnosed with a rare condition called encephalocele, or cranium bifidum, in which parts of the brain protrude outside of gaps that have formed in the developing skull. The parents were told that their baby likely wouldn’t survive very long after birth, or that if he did he wouldn’t have any brain function; he was simply “incompatible with life.”

As Sierra told the Washington Post, “We had no hope whatsoever.” The parents were unwilling to terminate the pregnancy, saying they wanted at least one chance to meet him before saying goodbye.

To virtually everyone’s surprise, Bentley came out on his due date, October 31st, 2015, kicking and screaming. After the first 36 hours, Sierra and Dustin had to take him home wearing the only onesie they bothered to purchase. Over the course of the next few weeks and months, Bentley continued to march on, save for a staph infection in his lungs.

Aside from the large sac containing critical parts of his brain atop his head, Bentley developed normally. He continued to grow, and cried when he was hungry. The doctors were incredulous, and insisted that the growth above his head was just “damaged tissue,” and that “there’s no way it could be functioning,” but Bentley’s behaviours and normal developmental trajectory suggested otherwise.

When Bentley turned four months, Sierra and Dustin took him to the Cleveland Clinic where a surgeon agreed that the infant was using his brain, but warned that it may not be possible to put it back in the cranium.

From there, they sought out Dr. John Meara at Boston Children’s Hospital, whose surgical team sees a few cases of severe encephalocele each year. After taking a look at Bentley, the surgeons realised that the parts of his brain located within the pouch could not be removed because they were responsible for cognitive functions such as motor control, problem-solving, and vision. The brain had to go back in, so they developed a plan.

Prior to the surgery, doctors had the benefit of practicing and refining the procedure using 3D-printed models of Bentley’s skull and brain sac. (Image: Katherine C. Cohen/Boston Children’s Hospital)

Using 3D-printed models, the surgeons planned out and practised the pending procedure. Bentley had 100 cubic centimetres of brain outside his skull, so the surgeons had to expand his cranium to accommodate it. Before the surgery, Meara had the benefit of working with a plastic model, which he sliced-up, and then sent back to the lab to assess how much more brain matter his team could fit inside the skull. 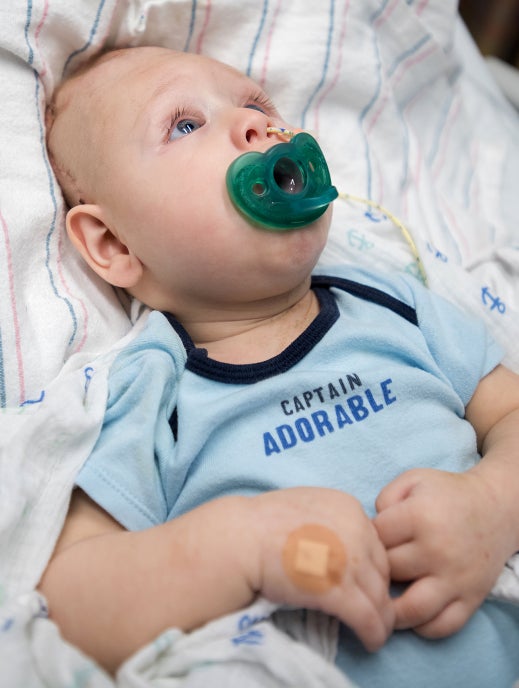 On May 24th, the surgery began. This date was carefully chosen because Bentley’s skull was sturdy enough to withstand the surgery; any later, however, and the encephalocele might rupture. The first step was to drain the cerebrospinal fluid from Bentley’s brain. The surgeons made further cuts into the cranium, and then gently eased the brain back into his head. Leftover bone from the cuts were used to close the gap. The whole thing took about six hours. The surgery went well, though Bentley had to return for a pair of follow-up procedures to add a shunt and to drain excess fluid from his brain.

Nearly a month after the surgery, Bentley appears to be doing fine, but no one can be sure what his future holds. It’s quite possible that his vision is impaired, but it’s not clear to what degree. He will begin physical therapy next month. “Because of how different his brain really is, [we] have no one to compare him to,” Sierra told WaPo, adding, “We just have to take it step by step.” [Washington Post, STAT]