Last month, a group of scientists, lawyers, and entrepreneurs gathered in secret to discuss the possibility of creating a synthetic human genome from scratch. Details of the plan have finally been made public, and it’s as ambitious as it sounds. But critics say they founders of the new project are avoiding the tough ethical questions.

It’s called the Human Genome Project-write (HGP-write), and it’s an effort to build and deploy a fully synthetic genome in human cell lines within 10 years. As the founders of the project describe in a short Science Perspectives article, the goal is to develop powerful new technologies that’ll allow scientists to bind long strings of synthetically made human DNA to power cells in a petri dish.

“The purpose of this project is to develop and test large genomes in cells, and that is where it stops,” noted Nancy Kelley in MIT Review. Kelly is a fundraiser and lead executive of the project. That being said, these biotechnologies could eventually be used to create artificial organisms and even designer humans. 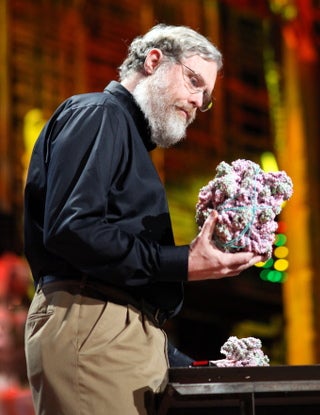 George Church from Harvard Medical School, and one of the co-founders of the new initiative. (Image: Steve Jurvetson)

It’s an ambitious goal that will require substantial improvements in DNA synthesis technologies. The new initiative, co-founded by Harvard Medical School’s George Church and NYU Langone Medical Center’s Jef Boeke, is an effort to overcome current limitations and develop the tools and knowledge required to synthesise long strands of DNA. The plan, which will implemented through a new independent, nonprofit organisation called the Center of Excellence for Engineering Biology, will need to acquire $100 million (£69 million) if it’s to meet its 10-year timeline. If everything goes according to plan, the cost of fabricating DNA could drop 1,000-fold over that time, making it incredibly affordable to build genomes from scratch.

If the new name sounds familiar, it’s probably because you’ve heard of its predecessor, the Human Genome Project-read (HGP-read). But instead of building DNA-reading technologies, the founders of HGP-write want to develop and apply powerful cellular machinery for the purpose of constructing vast chains of DNA. To date, the ability to build DNA sequences in cells has been restricted to a small number of short segments, hindering scientists’ ability to alter and understand biological systems.

“This grand challenge is more ambitious and more focused on understanding the practical applications than the original Human Genome Project, which aimed to ‘read’ a human genome,” Church said in a statement. “Exponential improvements in genome engineering technologies and functional testing provide an opportunity to deepen the understanding of our genetic blueprint and use this knowledge to address many of the global problems facing Humanity.”

Once the tools exist to create and string together long strands of synthetic DNA, scientists will be able to create virtually any kind of biological construct or organism. For instance, synthetic biologists will be able to manufacture better medicines for staving off viruses and cancer, or delete problematic genes. They’ll also be able to create better models for disease, and hopefully put a considerable number of lab animals out of work—though the opposite might also happen. These tools will also allow scientist to produce robust cell lines for the production of so-called biologics (i.e. biological products such as vaccines, allergenics, somatic cells, gene therapy, etc.) which are commonly used by the pharmaceutical industry.

Looking further ahead, the same technology could be used to build novel microbes and animals. Imagine, for example, bacteria that can consume plastic or clean up toxic spills. Synthetic biologists will literally be able to create what nature could not. More conceptually, advances in gene-writing could also be used to create custom-designed humans, including completely “artificial” humans without any parents.

Thankfully, the founders of HGP-write say they’re going to establish an open and ethical framework to guide their efforts. In their Perspectives article, the authors said the project “will require continual public involvement and consideration of the ethical, legal and societal implications (ELSI) from the start,” while simultaneously adopting a “responsible innovation” approach. This will require them to identify “common goals important to scientists and the wider public through timely and detailed consultation among diverse stakeholders.”

Some very nice words, for sure, but if you think all of this sounds a bit vague, you’re not alone.

“To use their own language—how they will go from observation to action?,” asks Megan J. Palmer, a biologist and engineer from Stanford University. “Confusion about transparency in the early stages of the project demonstrates that the main challenge in developing an ethical framework often lies in its implementation.”

Even with a framework in place, Palmer worries that the process to figure out if a new technology is desirable, effective, or safe can take years. This gets even more complicated once the process enters into the international arena.

“There are nascent efforts to conduct experiments and develop expertise in responsible innovation, but we have a long ways to go,” said Palmer. “The capacity to build genomes may bring new benefits, risks and understanding of our human makeup. But the grand challenge of such a project is not in synthesising human genomes—it’s in synthesising humility within our human scientific endeavours.”

No doubt, like so many other technologies currently in development these days—from gene editing through to artificial intelligence—the benefits of these pending advances are abundantly clear. But the issue of how we can make them safe remains the challenge. [Science]