The natural gas leak at Aliso Canyon earlier this year was already one of the worst environmental disasters in US history. Several months later, however, it has now gained the additional distinction of being the first industrial methane point-source visible from outer space.

That is according to a study published this week in Geophysical Research Letters, which used an infrared spectrometer on NASA’s Earth Observing-1 satellite to detect methane leaking near Aliso Canyon on three separate overpasses during December 2016 and January 2016. One of those detection events, shown above, nicely corresponds with methane plume data collected aboard a NASA research plane several days later: 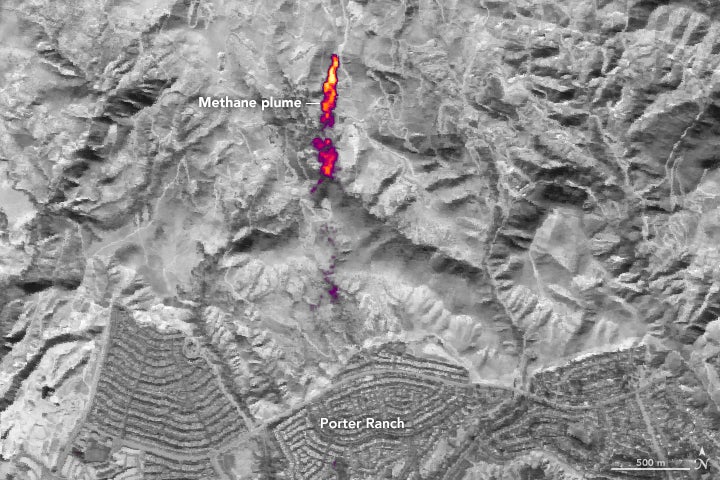 On the one hand, this is yet another illustration of the tremendous magnitude of the leak, which coughed up roughly 97,000 tonnes of methane, equivalent to the average annual greenhouse emissions of more than half a million cars. But more broadly, it speaks to the growing role of satellite technology in monitoring the environmental footprint of the oil and gas industry.

Just last month, the Obama administration announced the first-ever methane emissions regulations for oil and gas companies which will mean stricter oversight and tougher standards for new and modified wells. (Unfortunately, the rules do not yet apply to existing oil and gas wells, limiting their overall impact on the industry.) It’s a small but important step toward starting to reign in methane, a greenhouse gas with 80 times the global warming potential of CO2 that makes an under-appreciated contribution to climate change. As a highly visible methane disaster, the Aliso Canyon gas leak has helped mobilise public support for tougher methane regulations.

Methane emissions are notoriously difficult to track, given that they fluctuate wildly across space and time, that many of the facilities emitting methane are situated in remote locales, and that gas companies aren’t always great about self-reporting leaks. If space-based technology can hold the oil and gas industry more accountable, there may finally be hope of bringing this particular source of carbon pollution under control. [NASA Earth Observatory]