On 23rd May, something extraordinary happened at the South Pole. For the first time in 4 million years, carbon dioxide concentrations cleared 400 parts per million (ppm). It’s the last climate-monitoring spot on Earth to pass the historic milestone.

The South Pole is experiencing the same relentless warming trend as the rest of our planet, but owing to the fact that most of humanity’s carbon emissions are occurring far, far away in the northern hemisphere, the atmosphere at the bottom of the world takes a little time to catch up. It finally has, according to new data from the South Pole Observatory.

“The far southern hemisphere was the last place on earth where CO2 had not yet reached this mark,” Pieter Tans, the lead researcher at NOAA’s Global Greenhouse Gas Reference Network said in a statement. 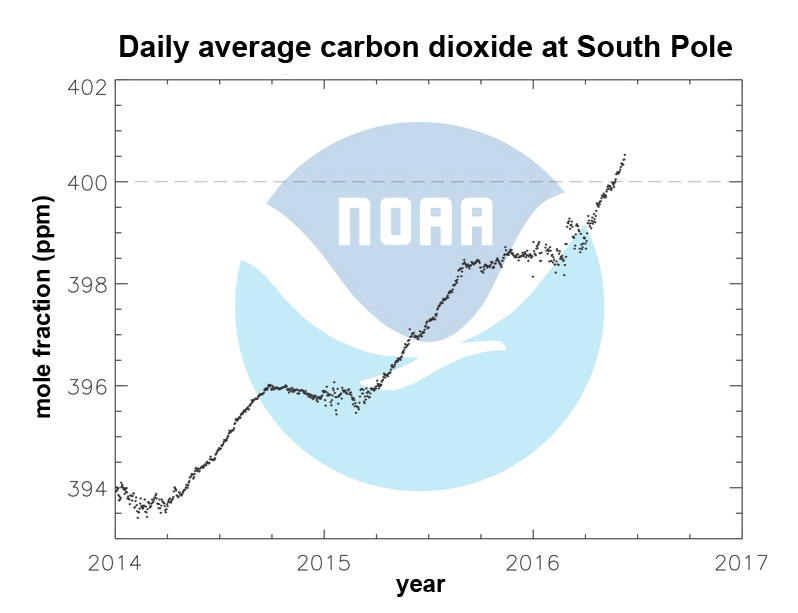 Carbon dioxide concentrations rise and fall annually, but we’ve also witnessed a steady upward trend since we began collecting round-the-clock observations at Hawaii’s Mauna Loa Climate Observatory in 1958. That station, which recorded CO2 levels of a cool 310 ppm in the late 1950s, broke 400 ppm for the first time in 2013. Since then, 400 ppm readings have become the frightening norm—the world passed that threshold for an entire month last year, and thanks in part to El Niño, 2016 will likely be the first year in the history of our species where global average CO2 concentrations exceed 400 ppm.

It’s possible that the South Pole Observatory will see its carbon readings dip below 400 ppm in the future. The same cannot be said for the planet at large. Barring a large-scale geo-engineering effort, the atmosphere will remain carbon-loaded for thousands of years to come, even if everybody on Earth stops using fossil fuels tomorrow.

As climate scientist Ralph Keeling recently put it, “we are now in a new era of Earth history.” It’s up to us to decide just how different that new era will look. [NOAA]