It’s fun watching people wearing an Oculus Rift or HTC Vive run into walls, trip over furniture, or smash into other obstacles while playing a VR game. But it’s not as fun when you’re the one accidentally breaking your own TV, so Nyko has come up with a solution that makes it safer to explore a VR world while you’re inside the real one. 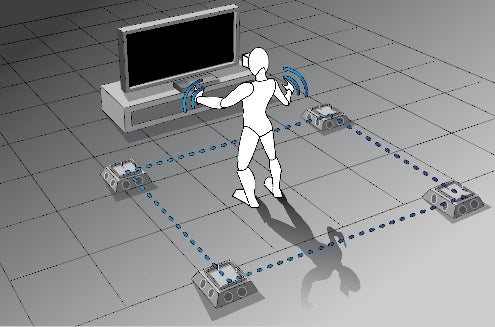 The VR Guardian system is made up of four wireless positional sensors that you arrange in a square—as large as 20x20 feet—to define a safe area where you’re free to move and flail your arms without hitting anything. To let you know when you’re getting close to the invisible fence the sensors create, a wristband worn on each arm will start to vibrate letting you know to back off, without distracting you from your VR experience.

Available this autumn for $100 (£71), the four positional sensors are designed to stack and all charge at the same time from a single cable, making it easier to ensure they’re always ready to go when you get the hankering for some VR. Battery life is rated at about 11 hours for the vibrating wrist bands and upwards of 25 hours for the sensors. So you’ll get tired of wearing a VR headset long before the batteries on these accessories need to be recharged. [Nyko]