Some male insects — especially beetles — boast a penis that’s several times the length of their bodies, which... wow. New research explains why these insectoid dongs need be so long, and how these bugs are still able to get it on.

Male beetles are currently in the midst of an evolutionary arms race among themselves. They must evolve longer and longer penises because females have likewise evolved exceptionally long internal reproductive ducts. Only those males with the longest penises are able to reach and fertilise her eggs. Like the rhino beetle and its massive horn, size truly matters. But in this case, the hyper-long penis is not an ornamental display: it’s all about function. 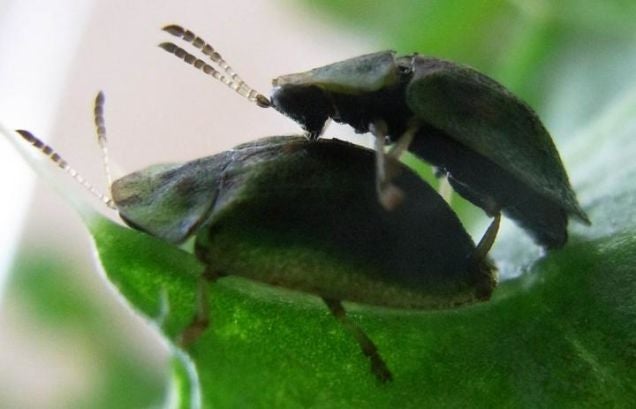 To get to the bottom of how male beetles use their unwieldy willies, entomologist Yoko Matsumura from Kiel University went to the tip of the problem. Literally. She discovered that the ends of these penises are quite soft, allowing the males to rapidly “shoot” their evolutionarily exaggerated members in and out the female’s duct, resulting in an insectoid version of the quickie.

The male is able to do this by virtue of special muscles that surround the penis. These muscles provide the force required for rapid and precise penetration. The penis is quite stiff at the base, but it gets progressively softer towards the tip.

“The long ducts in females slow down penetration, so the time-pressured males have co-evolved to counteract this obstacle,” Matsumura said in a press statement. “After running computer simulations, we think that this composition is the fastest at penetrating the female duct, so it appears softer tips are better.”

Matsumura’s research also shows that these extended penises perform an added function: the males use them to “scrape” the female’s duct free of competing males’ sperm. This serves to reduce the competition.

Among other applications, the research could result in superior catheters and medical injectors, whereby narrower tubes could be controlled more precisely. So thank you, dear beetle, for having such an inspiring — and unique — body part. [Society for Experimental Biology Annual Meeting 2016]