Dating App Bumble Wants to be the Next LinkedIn

When I’m trying to get laid, the last thing on my mind is whether or not I should be looking for another job. But Bumble, the dating app founded by ex-Tinder co-founder Whitney Wolfe, seeks to address this issue with a new feature that essentially amounts to a gamified version LinkedIn.

BumbleBizz, as it’s so named, will match Bumble users by industry and location. It’s a spin on the app’s existing functionalities (Bumble and BumbleBFF, which match people with paramours and friends, respectively) only this time, the dream match is a new job or mentor. It will work a lot like the other two features, with a requisite mutual “yes” swipe and ladies-first message for opposite-sex interactions.

“As the first to bring the ‘swiping’ experience to professional networking, BumbleBizz is powered by the notion that a connection or simple exchange of information can lead to the opportunity of a lifetime,” the company touts in a description. 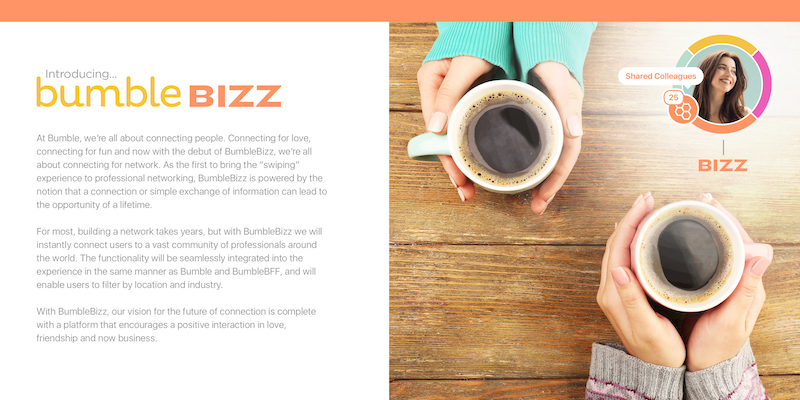 The desire to combine every part of a user’s life (romantic, professional, and platonic) into one neat little package makes some sense from the app’s perspective. But when it comes down to it, the only response I can muster to this feature is GODDAMMIT.

It’s unnecessary and dumb to gamify every conceivable aspect of a human’s life. But more to the point: why must I worry about finding a cool new job while I’m also out hunting for some action. Can’t you people let me find a sex friend in peace?

Imagine, if you will, the conversation after “matching” with a prospective professional connection. “Hey, uh, so I know this is a dating app and all, and now you know I’m definitely on here to find a sex friend, but, uh, wanna grab some coffee and talk about working together?” It’s kind of like hitting on someone using a LinkedIn message, only in reverse.

According to the company, the feature is still in development, and likely won’t be available until autumn, which means your networking and bone-zone lives can stay separate for now. But come back-to-school season, beware: you may just find your boss on a dating app. Have fun at work the next day!