After five years and 445 million miles, NASA’s Juno mission arrives in orbit around Jupiter on Monday to begin an unprecedented scientific study of the behemoth planet that shaped our solar system.

In addition to doing amazing science, Juno itself is an amazing machine, built to fly risky manoeuvres in an unimaginably hostile environment. Here are five things you should know about one of the most ambitious space exploration missions ever built.

It’s About to Break a Speed Record

Over the past few weeks, Jupiter’s gravity has been reeling Juno in, accelerating the spacecraft to breakneck speeds. By the time it arrives, Juno will be one of the fastest human-made objects in history, moving approximately 260,000 kilometres per hour (165,000 mph) relative to the Earth. That’s roughly ten times the top speed of the Space Shuttle.

When it enters Jupiter’s orbit on the evening of July 4th, Juno will shed some of its velocity in 35-minute main engine burn. But even after slowing down to a paltry 210,000 kilometres per hour (130,000 mph), it’ll still be the fastest spacecraft ever to enter orbit around a planet. The reason for Juno’s incredible speed? Getting the spacecraft as close to Jupiter’s cloud tops as possible.

It’s hard to imagine a more terrible place to operate sensitive electronics than Jupiter’s cosmic backyard. The gas giant’s magnetic field is constantly sucking up charged particles from the solar wind, ensconcing the planet in “radiation belts” millions of times more intense than anything experienced on Earth.

To shield Juno’s scientific payload, the spacecraft has been outfitted with a first-of-its kind radiation vault. A 180 kilogram titanium box roughly the size of an SUV boot, the vault will reduce ambient radiation exposure approximately 800 fold. “The radiation vault is a very cost-effective technique, and I think it’ll feed forward into other missions,” Juno project manager Rick Nybakken told Gizmodo.

Outside of the vault, the scientific instruments’ external sensors are spot-shielded with tantalum, while Juno’s solar panels are coated in a special radiation coverglass. Even with all of this protection, the spacecraft will accrue radiation damage over time. By the end of its mission in February 2018, it’ll have been dosed with the equivalent of 100 million dental x-rays.

Frustrated when your phone has shitty reception? NASA can put your problems in perspective. When Juno phones home to tell us that its orbital insertion manoeuvre went off smoothly, the signal it sends to Earth will be roughly a billion times weaker than what you’d receive in a typical cell phone call.

“Juno is trying to protect itself going into orbit, and it’ll be turned away from the Earth,” said Sonny Giroux, the Deep Space Network program manager at communications company Harris Corporation. “That means the signal during the orbital insertion event is much weaker than what we got back from New Horizons.” 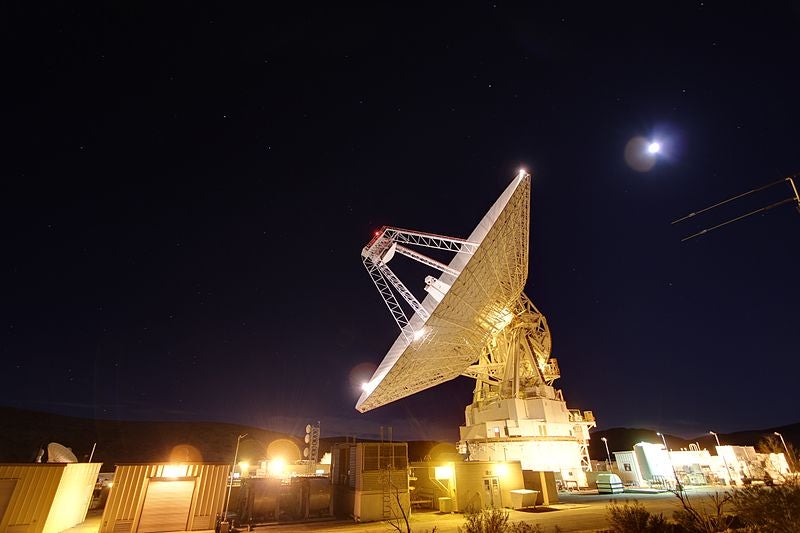 The 70-meter antenna at the Goldstone Deep Space Communications Complex is one of several that will listen for signals from the Juno spacecraft on July 4th, 2016. Image: NASA/JPL-Caltech

Two stations in the Deep Space Network—one in Goldstone, California, another in Canberra, Australia—are going to be listening for Juno’s call; arraying several of their antennae to maximise detection power and focusing on Juno’s position in the sky with laser precision. “This is basically like hitting a hole in one from California to D.C.,” Giroux said, describing the accuracy and precision needed to catch Juno’s signal.

It Runs on Renewable Energy

Juno is the furthest solar powered mission ever conceived, built to run on the sun in an environment 25 times dimmer than the Earth. Even with state-of-the-art solar technology and energy-efficient electronics, the spacecraft needs to catch a lot of sunlight. Spanning 20 metres, its three solar arrays contain approximately 18,000 solar cells in all.

Juno’s orbits were designed so that it never flies behind Jupiter into darkness—except during its boldest manoeuvre, the orbital insertion. “For this one manoeuvre, we have to turn the spacecraft 90 degrees and go out of the sun for a period—but we’ve sized the batteries for that,” Nybakken said. Still, he added, “I’m not really going to relax until that main engine burn is complete.”

We Can All Help Juno Pick Targets

A trio of JunoCam photos taken prior to the spacecraft’s Earth gravity assist on October 9th, 2013. Image: NASA/JPL-Caltech/MSSS

NASA learned a lot about public engagement from the New Horizons Pluto flyby last year, and with Juno, the space agency has hit its stride. To keep the Jupiter-loving public involved in the latest planetary science discoveries, it installed JunoCam. This citizen science camera allows amateur astronomers to decide which of Jupiter’s swirling storm clouds should be photographed during each of Juno’s 33 close flybys. With a field of view much wider than that of the Voyager probe, JunoCam will capture panoramic shots of Jupiter from altitudes as low as 3,100 miles above the cloud tops. Check out the JunoCam website to learn more.