Competitive eater Joey “Jaws” Chestnut set a new record this week when he scarfed down a whopping 70 hot dogs and buns in just 10 minutes at the annual Famous Nathan’s hot dog eating contest in Coney Island. How do he and other champion competitive eaters do it? With a couple of savvy tricks of the trade, and a bit of science.

Dipping the food item of choice in water is key, since it softens the food and makes it wetter, so it’s easier to chew and swallow. Top eaters also break their food into smaller pieces so they can fit more in their mouth at the same time. Former Nathan’s Famous champ Takeru Kobayashi is known for his so-called “Solomon technique”, breaking a hot dog in half and stuffing both pieces into his mouth simultaneously to speed up the process.

The International Federation of Competitive Eating (IFOE) rules say that competitors don’t have to consume both hot dog and bun together, and you’re allowed to vomit it all up — dubbed a “Roman incident” — once the contest has officially ended. Since 50 hot dogs and buns contain around 12,500 calories, that’s probably a wise move, despite the risk of stomach acids damaging your oesophagus and tooth enamel. 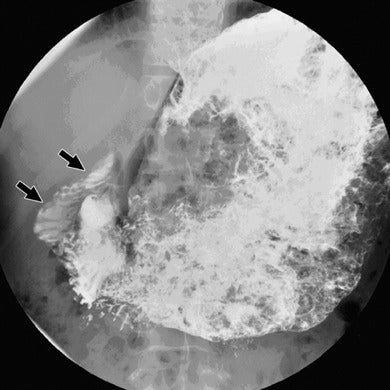 But none of that explains how Chestnut and his ilk manage to stuff so much food into their stomachs in such a short time span. According to a 2007 study by researchers at the University of Pennsylvania, the stomachs of competitive eaters can expand to truly alarming dimensions.

The authors describe the stomach of their 35-year-old male test subject (after eating 36 hot dogs in 10 minutes) as being a “massively distended, food-filled sac occupying most of the upper abdomen”. The subject insisted he felt fine — no bloating or stomach pain — and could keep going, but the researchers terminated the experiment, fearing he was at risk of gastric perforation.

The subject’s stomach expanded so much that it overcame his “satiety reflex”. Usually when we’ve eaten a sufficient amount of food, the brain sends signals telling the body it is full; surpass that, and it triggers the vomit reflex. That didn’t happen in the test subject’s case, presumably because he had practised for months, gradually eating larger and larger amounts of food to stretch his stomach. This also kept the stomach from breaking down the food consumed via gastric peristalsis.

So what happens to folks like Chestnut who stretch out their stomachs this much year after year? Nobody really knows. But the Pennsylvania team warned of “intractable nausea and vomiting”, and need for stomach surgery later in life because at some point they might not be able to eat at all without it.

Is the risk worth the Mustard Yellow International Belt and $10,000 prize awarded to the winners of Nathan’s Famous annual competition? Chestnut must think so: this is the ninth time he’s won the contest. But odds are that $10,000 barely covers his annual food bill. [USA Today]