Most Americans Are Still Fearful of a Transhumanist Brave New World

Most American adults are nervous about the prospect of enhancing humans beyond normal capacities, a new Pew Research Center poll reveals. But while many of those surveyed expressed concerns about brain-boosting chips and designer babies, a significant number had a positive view of technology’s ability to transform humans and society.

What makes this new poll particularly interesting is that the Pew Research Center sought to assess the public’s reaction to, and perceptions about, technologies that don’t even exist yet. What’s more, these pending technologies — unlike flying cars and space elevators — promise to alter and augment human capacities in some rather profound ways, such as boosts to intelligence, strength and stamina, and resistance to diseases. But as the results of the poll show, most Americans aren’t ready to buy into this biologically enhanced future.

More than 4,700 American adults were asked to consider the ramifications of three different, but still hypothetical, biomedical interventions. These included gene-editing to prevent babies from developing serious diseases, implantable brain chips to give people improved ability to concentrate and process information, and the prospect of synthetic blood transfusions to endow people with greater speed, stamina, and strength. The Pew researchers carefully chose these three enhancements following focus group sessions and advice from experts. The idea was to pick interventions that touched upon an important aspect of human enhancement, while still remaining relatively straightforward and constrained. 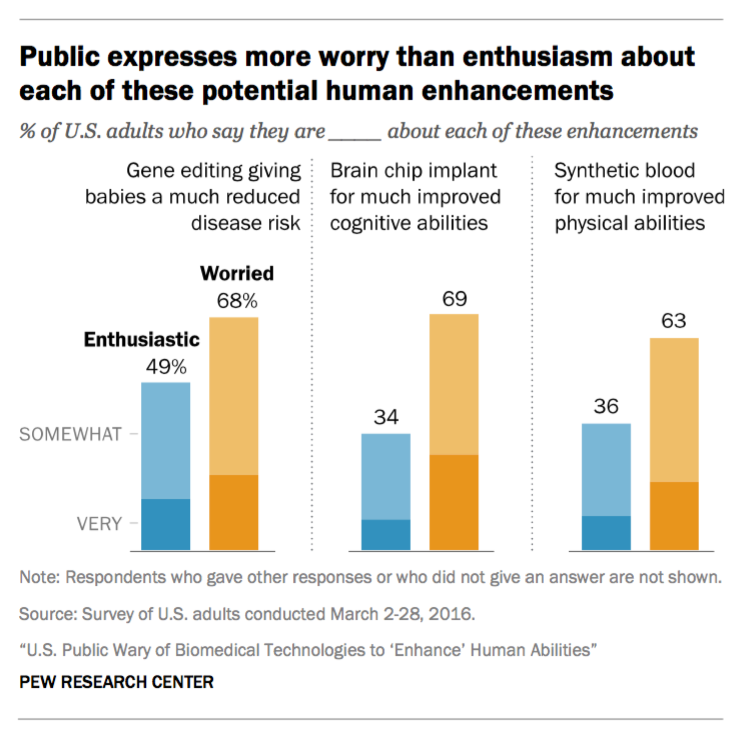 According to the results, 68 per cent of Americans are either “very” or “somewhat” worried about gene-editing, while 69 per cent and 63 per cent had the same opinion of brain chips and synthetic blood (respectively).

Consistent with these results, 66 per cent said they would not want brain enhancements, and 63 per cent would not want synthetic blood transfusions. Interestingly, respondents were split on the question of wanting gene-editing to help prevent diseases for their babies: 48 percent said they would, while 50 percent said they would not. This is a particularly interesting result given the potential for CRISPR—a powerful new genetic cut-and-paste tool—to actually make this happen. Last year, scientists in China became the first in the world to use the system to genetically modify human embryos, which were destroyed soon after.

The majority of those polled worried that such enhancements will exacerbate the divide between the haves and have-nots. Specifically, around 73 percent believe social inequality would result if brain chips are initially available to only the wealthy. More than two-thirds believe that these technologies will become available before they’re fully tested or fully understood. At the same time, many Americans believe that these technologies are going to happen, regardless of their own opinions; close to half think these changes to human capacities, or changes like them, will become common in the next 50 years.

A majority of those polled believe such enhancements are morally unacceptable, while only 36 per cent believe that gene-editing will have more benefits than downsides. Opinion is roughly split on the question of whether or not these interventions qualify as “meddling with nature”. 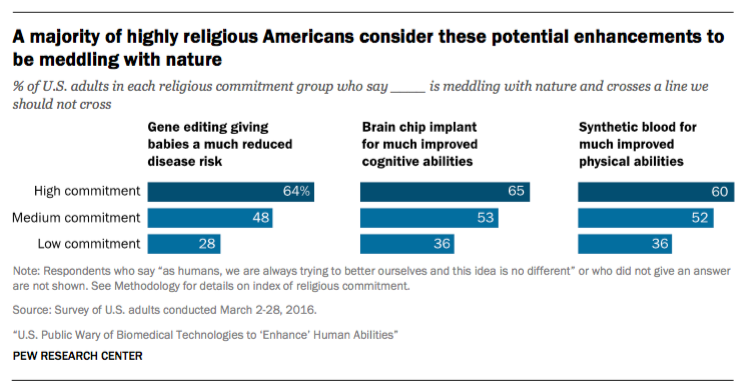 Results of the survey were sorted according to age, gender, socioeconomic status, education, and so on, but the true delineator of opinions was the strength of religious convictions. “Religiosity definitely stands out as a key divide in how people are thinking about these issues,” said Cary Funk, Associate Director of Research at the Pew Research Center. The more religious the respondents, the less likely they were to accept these prospective enhancements. Around six in 10 people rated high in religious commitment agreed it was meddling with nature and that it was a “line that should not be crossed”. Conversely, a majority of people assessed as being non-religious believe each of these enhancements would be no different from other ways humans are trying to better themselves.

Men and women also shared differing opinions. Around 43 per cent of women were in favour of gene-editing for their offspring, compared to 54 per cent of men. The same went for brain chips (26 per cent vs 39 per cent) and synthetic blood transfusions (28 per cent vs 43 per cent). 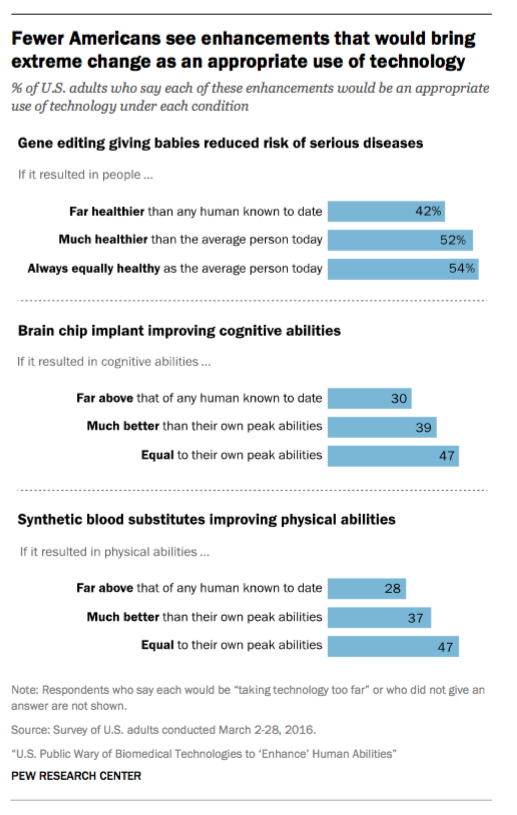 The more extreme the enhancement, the less likely people were to support it. Same for the degree of permanence. For example, nearly half of respondents were willing to accept blood transfusions if the resulting impacts on strength, stamina, and speed matched a person’s own peak ability. But if the intervention resulted in physical abilities “far above that of any human known to date”, only 28 per cent believed it was an appropriate use of the technology. Similar results were recorded for use of brain chips.

An interesting conclusion of the survey is the consistency with which Americans view enhancement technologies. “Because the three [technological] scenarios were so different it was striking to see how similar these patterns were in terms of their thinking about what would be more acceptable,” Funk told Gizmodo. Accordingly, the survey also showed similarities between opinions on these speculative enhancement technologies and those already in existence, including elective cosmetic surgery, laser eye surgery, skin or lip injections, hair replacement surgery, and contraceptive surgery.

To supplement the survey, Pew organised a series of focus groups. Most who participated felt that no effort should be spared to help the sick, but that society should proceed cautiously to avoid the creation of “superhumans” or human “robots”. Interestingly, some people ranked high in religious commitment had no problem with “playing God”, arguing that God wants humans to make the most of their abilities and improve humanity. Other themes discussed included the need for oversight and regulation, and the suggestion that no enhancement should ever be imposed on anyone against their will.

James Hughes, the director of the Institute for Ethics and Emerging Technologies (IEET), has mixed feelings about the poll results. A technoprogressive bioethicist, Hughes is largely in favour of human enhancement, though under strict conditions.

“Respondents had a mostly positive view of the effects of science and technology on society, and their concerns about enhancement were focused on safety and inequality,” Hughes told Gizmodo. “Safety and equity are things that can be addressed by public policy, so even if they were more worried than enthusiastic about brain chips or gene editing, those concerns can be alleviated.” He believes that concerns about brain chips being “the mark of the beast”, as some in the focus groups expressed it, are less tractable, but nothing that bothers atheists and agnostics.

Hughes says that these technologies result in a kind of “future shock”, and that acceptance takes time. “It is a process, and the evolution of public opinion towards acceptance is fairly predictable,” he said. “The danger is that new technologies can get linked to irrational anxieties — about terrorism, for instance, or crime or immigrants — before they become normalised”. Hughes believes the same thing is likely going to happen with robotic driving, where the public will be much more freaked out by infrequent robo-accidents then by the thousands of daily deaths from human driving.

Eventually, the area of overlap between technologies that simply remedy our health problems and those that enhance our capabilities will widen, further complicating the issue (this is what’s referred to as the “therapy versus enhancement” debate). Hughes questions the wisdom of banning a therapy, for example, that would in effect work to fight off multiple diseases. “When people and politicians finally confront these questions they will come around to supporting the benefits of enhancement,” he said.

“These are public issues — science issues are civic issues, and clearly technologies like CRISPR and others are raising broader social and ethical debates, and the public is part of that,” Funk said. “This is an early look to find out where the public stands on these issues, and I think that has an importance for our broader debate." [Pew Research Center: Survey Findings, Focus Group Findings]