Italian researchers have used the location of confirmed debris from Malaysian Airlines Flight MH370, which disappeared two years ago, to estimate where the missing airliner might have crashed, and where further debris may be found onshore. Their simulations show that the wreckage may lie upwards of 310 miles further north than current estimates.

Since flight MH370 lost contact on March 8, 2014, with 239 passengers and crew onboard, investigators have found five pieces of floating debris that originated from the missing plane. The first piece of tangible evidence washed up on the island of Réunion, approximately 2,485 miles (4,000 km) from the presumed crash site. Since then, six other parts have been found in Mozambique, South Africa, and on Rodrigues Island.

Using this information, Eric Jansen from the Euro-Mediterranean Centre on Climate Change and his colleagues backtracked the most probable paths taken by the floating debris to establish its point of origin, thus improving estimates as to where the plane went down in the southern Indian Ocean. In a new paper published in Natural Hazards and Earth System Science, the researchers sketched out an expanded search area, while also showing where other bits of debris might have spread.

“Our result is the first to calculate the movement of the debris that best agrees with all five of the currently confirmed discoveries,” Jansen said in a press statement. “This should make it the most accurate prediction.”

According to the simulation, the most probable locations to discover washed up debris are are Tanzania, Mozambique, and the islands of Madagascar, Réunion, Mauritius, and the Comoros. As for the main wreckage, it likely sits at the bottom of the south Indian Ocean somewhere between 28 degrees south and 35 degrees south.

Investigators are currently searching for the wreckage off the coast of Australia, which overlaps nicely with the new simulations. However, the debris could have originated up to around 310 miles (500 km) further to the north. “If nothing is found in the current search area, it may be worth extending the search in this direction,” advised Jensen.

“[We performed] many simulations that are all plausible given the information that we know about the flight,” said Jensen. “When we combine the results of all these simulations, we give more importance to those that predicted the debris that was found correctly.”

Animation showing how the floating debris from the MH370 aircraft could have spread, from the day of the crash up until May 2016. (Credit: (Image: Jansen et al., Nat. Hazards Earth Syst. Sci (2016))

For the first stage of the simulation, the computer calculates the various ways in which the debris could have drifted. The locations of the debris are only used in the final stage, when combining the possible drift trajectories to isolate the most probable ones. This model can be updated in the event that new debris is uncovered. 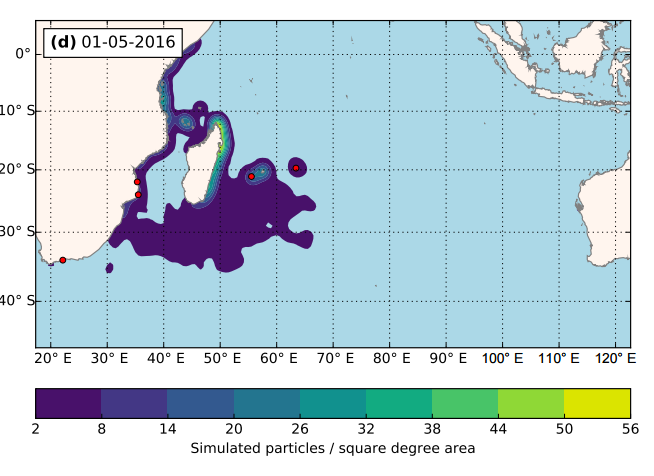 “The disappearance of flight MH370 is probably one of the most bizarre events in modern history,” said Jensen. “It is important to understand what happened, not only for all the people directly involved, but also for the safety of aviation in general. We hope that we can contribute to this, even if our study is just a small piece of a very complicated puzzle.” [Natural Hazards and Earth System Science]