Scientists are Redefining the Kilogram

Stop the presses! Physicists at the National Institute of Standards and Technology have made a new measurement of Planck’s constant to a highly accurate degree. It’s the latest step toward improving the official definition of the kilogram, the unit of mass that underpins our entire international system of weights and measures.

Um... yay? Let’s just acknowledge that, as exciting science news goes, this is a hard sell beyond the most hardcore physics nerds. But it really does matter quite a lot.

Co-author John Pratt, a division leader at NIST, likens such tasks to maintaining a system. “Everybody wants to drive on the thing, but nobody really thinks about how it got there,” he told Gizmodo. “Doing these very basic standards measurements provides the ultimate infrastructure.” He admits that this still doesn’t sound particularly compelling, “but the lack thereof would be very compelling.”

Planck’s constant (h) lies at the heart of quantum mechanics. Atoms can only give off energy in discrete packets known as “quanta” — much like currency only comes in specific denominations — and that amount of energy is proportional to Planck’s constant. It’s a really tiny number, and hence extremely difficult to measure accurately. Using a high-tech twist on an old-school balance scale, the NIST scientists arrived at a value of 6.62606983x10-34kg∙m2/s, accurate to within 34 parts per billion. They described their latest measurement in a new paper in Review of Scientific Instruments. 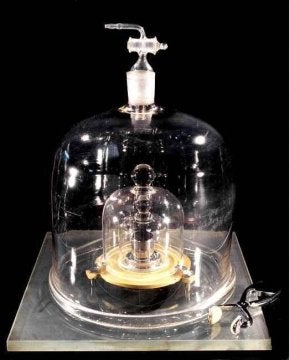 The international prototype of a kilogram, or IPK. (Image: BIPM)

Physicists aren’t doing this just for giggles. It’s all part of a broader effort to redefine the kilogram. Currently, its value is defined by an actual metal artefact the size of a golf ball — dubbed “Le Grand K” or IPK (for International Prototype of the Kilogram) — housed in a secure vault, under three glass bell jars, at the International Bureau of Weights and Measures (BIPM) just outside Paris. That artefact has set the kilogram standard for the last 127 years. But it’s slated to be phased out in 2018.

The origins of the kilogram date back to the reign of the French King Louis XVI, who established a unit called the grave to measure mass in response to all the cheating taking place among tradesmen. After the French Revolution and the establishment of the new Republic, governing leaders decided in 1795 that the measurement of mass should be the gramme, which they defined as the absolute weight of 1 cubic centimetre of water at 4 degrees Celsius.

But that was impractical for trade and commerce — who wants to lug a pea-sized unit of water around all day? Thus the kilogram was born on June 22, 1799: a piece of solid metal 10.00 times more massive than the gram. In 1875, seventeen countries signed a treaty so they could all use the same units for mass and length, and “Le Grand K” was forged, along with copies sent to all the participating countries.

If the kilogram has been working just fine for over a century, why mess with it? Well, it’s currently the only standard unit that still relies upon a physical artefact. A metre used to be defined by a metal stick with two marks on it, but in 1983 it was redefined according to how far light travels in 1/299,792,458 seconds.

Also, over time, the various artefacts have been diverging from each other in terms of mass. Even when stored carefully under bell jars, the replicas have been slowly gaining mass by absorbing contaminants in the atmosphere, although periodic cleanings can help minimise that gain. The IPK itself is actually losing mass, relative to all its official copies, a phenomenon which frankly baffles physicists. That discrepancy matters because much of today’s cutting-edge science requires measuring things at ultra-small scales. 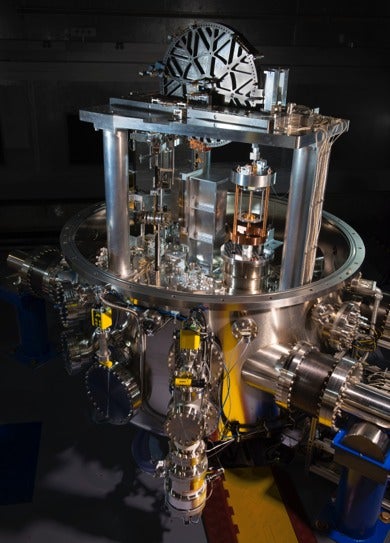 If scientists can’t rely on the kilogram for precise measurements, it poses significant problems for the rest of the SI system of measurement, because the kilogram underpins pretty much everything.

That’s why scientists are keen to redefine the kilogram according to a fundamental constant of nature. “We’re moving now to something that’s a complete abstraction,” said Pratt. Unlike the physical artefact, whose mass is changing ever so slightly with time, a fundamental constant is just that: constant and unchanging throughout the universe (in theory, at least).

Back in 2007, a mathematician and a physicist suggested redefining the kilogram as the mass of a large number of carbon-12 atoms. That’s certainly one way of doing it, but it’s also possible to redefine it according to Planck’s constant (the mathematical value includes the kilogram), assuming various independent measurements around the world can agree with each other to great precision.

And that’s why this latest NIST measurement matters: it’s one of several ongoing efforts to measure Planck’s constant in France, Canada, Germany, and the US. One collaboration is using a method that involves counting the atoms in a near-perfect sphere of silicon. The NIST team is using an apparatus known as a Watt balance. Essentially, it’s a high-tech scale that compares the weight of a given mass to how much electromagnetic force is needed to balance it. That number can then be used to calculate Planck’s constant. “The Watt balance can actually establish a link between mass and Planck’s constant,” lead author Darine el Haddad told Gizmodo.

Once all the results are in, they will be fed into a computer, which will crunch the data to arrive at the best overall value of Planck’s constant. And that will become the new basis for the kilogram as of 2018.

Most of us probably won’t notice when that happens. But scientists will have that much more confidence when making delicate measurements in the future. And they’ll owe it all to a handful of unsung heroes who laboured for years at a thankless task to ensure the kilogram remains truly constant forever. [Review of Scientific Instruments]