Something Is Erasing the Craters on Ceres

Ceres, the tiny asteroid belt world we’ve come to know and love through NASA’s Dawn mission, seems to delight in mysteries, from flickering bright spots to unexpected ocean minerals. Now, astronomers have discovered yet another puzzle while examining images of Ceres’ surface. Something has been erasing its craters.

Craters offer a window into a planet’s history, which is why they’re one of the first things astronomers examine when trying to understand a new object. For instance, one of immediate shocks from the New Horizons Pluto flyby last summer was that Pluto’s surface is mostly crater-free, indicating a geologically active interior.

Based on the heavily battered appearance of other asteroid belt objects, astronomers expected that our first close-up glimpse of Ceres would yield numerous large craters. Instead, we didn’t find any.

When Simone Marchi of the Southwest Research Institute and his colleagues analysed global image and topography datasets collected by the Dawn spacecraft over the past year, they discovered that most of Ceres’ craters are less than 60 miles (100 kilometres) wide. That’s in spite of the fact that neighbouring minor planet Vesta, which Dawn visited first, has craters of up to 300 miles (500 kilometres) across. 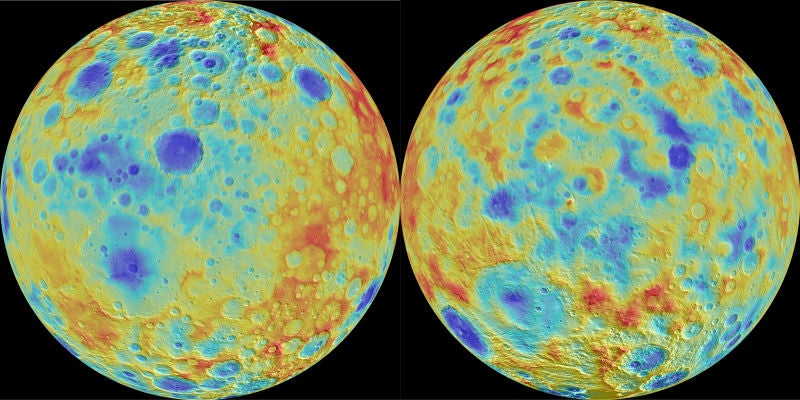 The topography of Ceres, with numerous deep craters but no particularly big ones. Image: NASA/JPL-Caltech/UCLA/MPS/DLR/IDA

“This was a total surprise,” Marchi, who led a crater analysis published today in Nature Communications, told Gizmodo. Considering Ceres’ size and its 4.5 billion year history, “it is extremely unlikely that Ceres was not hit by large objects,” Marchi said.

That means something has been eating away at Ceres’ big craters over time. Space Cthulhu aside, astronomers have a few hypotheses as to what it could be.

The first is that Ceres’ internal structure is responsible. Other recent work, including several detailed analyses of the dwarf planet’s bright spots, points to a layer of ice and salt just beneath the surface. Over geologic time, the flow of this briny mantle could have flattened out the overlying topography, a process known as “viscous relaxation.” As study co-author Michael Bland of the US Geological Survey pointed out, viscous relaxation flattens out big craters faster than small craters.

An even more intriguing hypothesis is that large craters have been erased by ice volcanoes. “We have these bright spots all over the surface—clearly, that’s stuff that came out of the interior,” Marchi said. It’s possible that Ceres was much wetter in the distant past, and that an early period of intense cryovolcanism dramatically altered the surface we see today.

Dawn’s most recent datasets could offer answers. The spacecraft is currently in a low-altitude orbit, snapping high resolution surface photos and taking detailed gravity measurements as it rotates Ceres every 5.4 hours. “With this high-resolution data, we can look more specifically at sites on the surface that may have evidence of large-scale cryolavas,” Marchi said. And with the gravity field data, we’ll get a clearer picture of Ceres’ interior, including its layering structure and any subsurface anomalies.

To Bland, the mystery of Ceres’ missing craters underscores the importance of designing missions to visit multiple targets. “Because of Dawn’s exploration of Vesta, we have a really good idea how many craters we should see on Ceres,” he told Gizmodo. “That is, Vesta provides a critical data set to calibrate our models of crater production on Ceres.”

“Ceres is unlike any other [asteroid belt] objects we’ve been able to sample through meteorites,” Marchi said. “I have no doubt there is a big story here.”