The Hyperloop One boys are at it again. This time, the company is reportedly countersuing its co-founder and chief technology office Brogan BamBrogan for $250 million, claiming that he and three others tried to stage a hostile takeover and conspired to start their own company.

The countersuit comes one week after an explosive lawsuit was filed by BamBrogan and three other plaintiffs against Hyperloop One, claiming incidents of assault, defamation, wrongful termination, intentional infliction of emotional distress, breach of contract, and violation of California’s labour code. 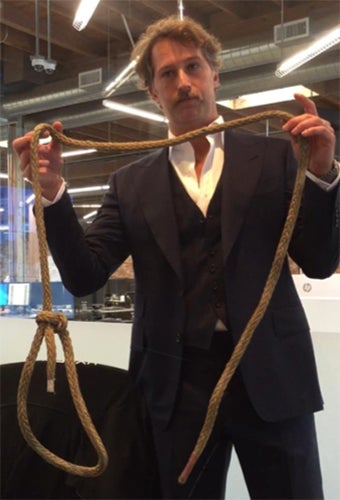 This photos is included in the original lawsuit filed by Brogan BamBrogan. It shows him holding a hangman’s noose left on his chair, allegedly to intimidate him. (Image: TKTK)

For the uninitiated, Hyperloop One is among the leading companies that’s working to make Elon Musk’s futuristic Hyperloop transportation system a reality. The company gained notoriety after it conducted public tests of its propulsion system.

The countersuit filed by Hyperloop One today refutes BamBrogan’s lawsuit claim-by-claim, and alleges that four employees referred to as the “Gang of Four” organised a rebellion against the other leaders in an attempt to overthrow the company.

The lawsuit claims the “Gang of Four sowed the seeds of their illegal conspiracy” after learning that they would be terminated following disruptive misconduct.

The countersuit also refutes one the most damning allegations in BamBrogan’s original lawsuit: that the brother of board chair Shervin Pishevar, who worked as a lawyer for the company, walked into Hyperloop One’s office and placed a hangman’s noose on BamBrogan’s desk.

The company claims that it was just a lasso.

“[T]he Sham Complaint attempts to dramatise a workplace incident—a rope tied with a lasso knot, not a hangman’s knot, left on the desk where BamBrogan’s keeps his trademark cowboy hat—into a story about a threatening ‘hangman’s noose’ that is tabloid fodder and fiction,” the lawsuit says.

“BamBrogan went so far as to file a reckless request for a restraining order—part of his publicity stunt aimed to gain leverage in this litigation—and the judge in that case summarily dismissed his request in a hearing that lasted less than one minute.”

Following last week’s highly publicised lawsuit, co-founder Shervin Pishevar and board member Joe Lonsdale announced they would reduce their voting shares to 20 per cent each. Previously, they controlled a combined 78 per cent of voting shares. The move was reportedly to “show goodwill toward employees.”

It’s still unclear if the countersuit was also intended to show goodwill toward employees, or if it was intended to send a message to the “gang of four” who are allegedly trying to hijack the company. Given the heaps of insane detail in both the original lawsuit and countersuit, it’s safe to say that this clusterfuck won’t be going away anytime soon.