Storage devices have taken many strange forms over history. We’ve seen everything from an old 19th-century loom to massive data centres that power companies like Facebook and Google. But along the way, some truly weird devices tried to change how we save our precious data bits.

These technologies were either wonderfully weird, woefully misguided, or just behind the times, but regardless, they each have their own idiosyncrasies worth remembering. Here are 10 of the weirdest storage devices ever created.

One of the earliest methods of recording and data storage — the phonograph wax cylinder— wasn’t so bad when it was dreamt up by Thomas Edison all the way back in 1877. But my my, was it weird.

These wax cylinders worked like proto-vinyl, which would eventually replace them. But the worst part is you could only really listen to the recordings a dozen times or so before it became completely useless. Museums are trying to preserve these fragile cylinders, and the ones that have been successfully saved for the digital age are nightmares to behold.

Although it’s a footnote in history, the Twiggy drive (which got its name from the extremely thin actress nicknamed “Twiggy”) in Apple’s Lisa PC is now retro-computing legend. The story is that only the Lisa 1 features this unique storage system, and it almost came to the first Mac in 1984. The drive, however, proved to be too unreliable compared to the more popular 3.5-inch floppy disks of the time. Apple had to even offer free upgrades to Lisa 1 owners when the Lisa 2 launched with a floppy drive.

Now, a Twiggy Mac prototype (as they’re called), is an Apple collector’s dream and can sell for as much as £25,000.

LaserDisc was a fine enough medium that was completely outdone by its more compact counterpart in almost every way. First, the size of a LaserDisc made storing these thing a headache. They also held such little information, 30 to 60 minutes or so, that full-length films needed to be spread across several discs. The quality of the content depended heavily on the quality of the player itself, too. With DVD players, which would eventually supplant LaserDisc, there was more uniform playback across all devices.

LaserDiscs also weighed over 200 grams per disc. Yeesh. But LaserDiscs still feel like space-age vinyl record, and vinyl seems to be making a comeback. Somehow, I don’t think LaserDisc will share a similar fate.

Zip Drives could easily be on this list (just for the ‘click of death’ alone), but it felt more appropriate to include the technology that came after the Zip drive — the Jaz Drive — which was completely blind to the way technology was heading in the '90s.

Jaz drives were sold as a high-end product compared to Zip and could hold 1GB to 2GB amounts of storage, decently impressive at the time. But almost at its inception, CD-R had overtaken the market and when Apple introduced the CD-ROM-based iMac in 1998, it was all downhill from there. Of course, that didn’t stop the Jaz and Zip drive creator Iomega from creating one last storage abomination. May it rest in peace.

Yes. The same company that was being criticised for ‘click of death’ actually launched a product named Clik. Not the best idea ever. Even though it eventually rebranded the technology to PocketZip, it couldn’t stop Iomega’s outdated tech from being completely destroyed by the faster, more efficient, and cheaper storage technology known as flash.

But at least we’ll always have this amazing advert.

Smaller is better, right? Well, not always. Sony’s disastrous attempt at miniaturing CDs stands in opposition that that traditional tech thinking. Sony’s biggest problem selling the MiniDisc, which looks great on paper, was that its players were too damn expensive (over £400 at launch), especially when it would be teenagers and young adults most likely buying these things. CDs and CD players remained cheap and the go-to music player of choice.

MiniDiscs still went on to have an impressive (possibly foolish) 20-year lifespan, even finding niches of popularity among professionals. But MiniDiscs true death arrived way back on October 23, 2001 when Steve Jobs introduced the iPod. Au revoir, MiniDisc.

Divx is a blip in the history of storage devices and a really strange one. The company who was the driving sales force behind the idea, Circuit City, is now completely out of business, so that should tell you something.

The idea was essentially a type of disposable DVD that Circuit City could sell for the equivalent just a few quid, only allowing you to watch whatever was on the disc for 48 hours. Then the disc was useless unless you bought more time or purchased the content out right.

You can see this as a kind of pre-streaming, pre-Netflix rental system idea, which was pretty forward thinking, but the Divx-specific DVD players had to phone home every time you started playing a disc, which can easily become a privacy nightmare. Also, trying to sell specific hardware for a not-even-close to ubiquitous feature usually ends in disaster.

The one isn’t so much weird as it is a complete failure. Vita memory cards fell into the same trap as the company’s flash-based memory sticks, essentially a shittier version of SD cards.

In many ways, the Vita handheld console was a great idea that was choked to death by its own company with a serious lack of support or even interest, really. But Sony also charged exorbitant prices for Vita-specific memories cards. As of today, 64GB Vita cards cost about £100 when normal 64GB microSD cards go for about £10. It’s almost embarrassing how blatantly obvious Sony is just trying to force people into an expensive ecosystem and reap all the monetary rewards. 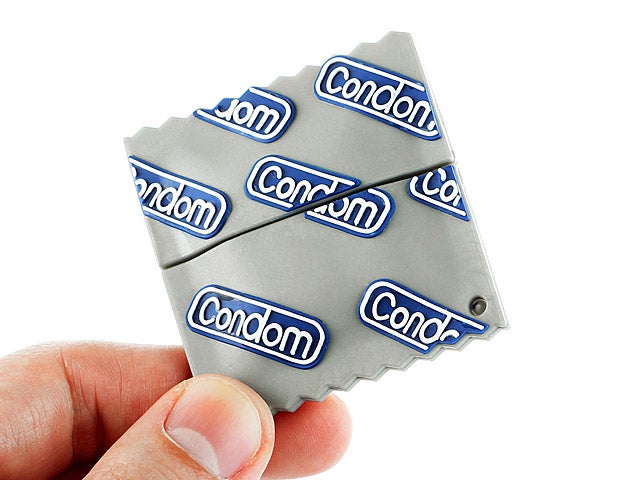 “Keep your files protected.” No thanks.