The Strangest Places Pokémon Go is Sending its Players

Pokémon Go is the best mostly broken game I’ve ever played. It crashes in the middle of battles. There are constant server issues. It’s a menace to my health and well-being that has burrowed itself into my heart like a blood clot. But as the game claws its way to usability, players are realising that Niantic did a really half-arsed job setting up the in-game locations, and Pokémon Go is sending people to some really strange places.

Aside from wandering around to catch monsters, the game involves walking to “gyms” and “PokéStops”, which are where Pokémon battle each other and where items are collected, respectively. Gyms and PokéStops are supposed to be linked to local landmarks. The trouble is that Niantic imported these “landmarks” from their earlier game, Ingress, where those locations were created and tagged by players, and seemingly never reviewed before becoming an integral element of a game for children.

Aside, of course, from the incident in which a Wyoming teen found a dead body while playing the game, many of these locations are irrelevant, bizarre, or borderline offensive, and players are beginning to catalogue them on Tumblr, Twitter, and Reddit’s r/TheSilphRoad. Compiled below are the strangest PokéStop locations people are claiming to have come across. They’ve been verified against the Ingress game map wherever possible.

Looks like there's a PokeStop at the strip club by work. Don't think this stop was meant for all ages... #PokemonGO pic.twitter.com/PDdLh0gKsa

@iPokemonGO found a Pokéstop at Seattle’s Club Z, which, according to the Ingress description, is home to an all-hours mirrored gloryhole maze. While the business’s floor plan does show a glory hole room on the third floor, Gizmodo is unable to confirm how reflective it is or its hours of operation at this time.

An Alarming Number of Abortion Memorials

Maybe a lot of the Ingress players are pro-lifers? Because there. Are. So. Many.

My nearest Pokemon Gym is right through this overgrown thicket. It's....oh....ohhhh... pic.twitter.com/0u6lJurY4U

Tumblr user drawn4life also discovered a PokéStop at the gravesite of “a great guy” only identified as Nick at the Evergreen Funeral Home and Cemetery in Everett, WA. YouTubers Beware The Flood were directed to a graveyard in Philadelphia beside a strip club. An unidentified mausoleum was also found by merrcilessly.

Two roadside memorials were also tagged and then discovered by Mike Drucker and Phil Cogar.

Dick’s Balls and This Gigantic Cock

Spotted by shadowkeese, possibly in New Jersey, and jasprosesprite-2 in Delaware, respectively. Just my speculative take but: this is what happens when you allow unmoderated user content. 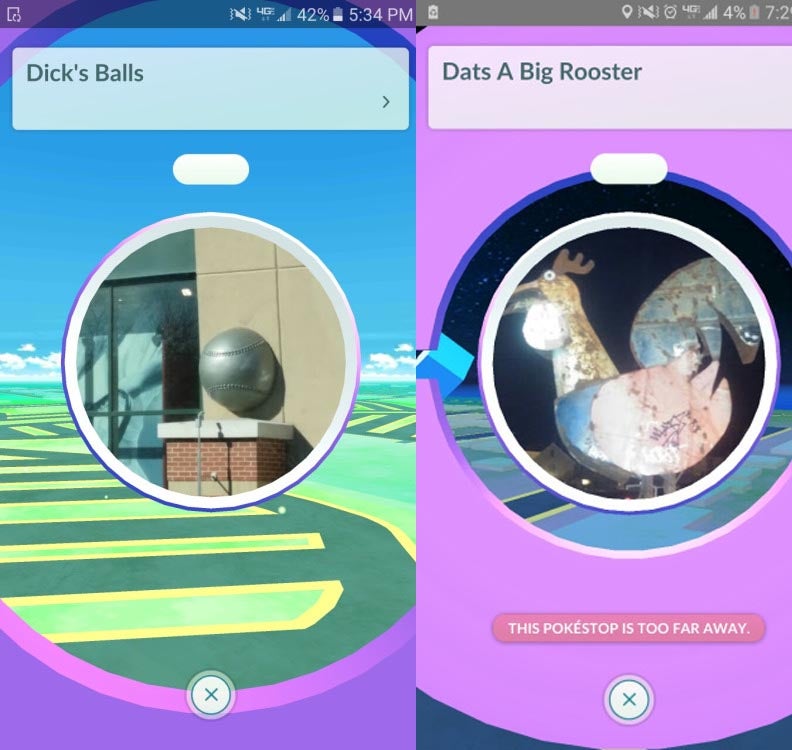 Some Sort of Monument to Chiang Kai Shek???

Shek being the person who, if memory serves, killed a whole lot of people.

A Church of Scientology building

The Church of Scientology has finally proven its usefulness by being a PokeStop. #PokemonGO pic.twitter.com/s19m9xUXUk

It’s far from the first time Pokémon Go has sent someone to church, but it’s definitely the strangest. Jesus is found elsewhere, my children.

The Smash Mouth fans among you might remember this place being featured in season 9, episode 2 of Diners, Drive-Ins, and Dives.

Just say it Niantic. Just come out and say, “we’re not even fucking trying”.