These Nearby Earth-Sized Planets are Looking More and More Habitable

Two months ago, researchers discovered that a nearby star system held at least three potentially habitable planets. Now, it turns out that at least two of those planets have even more potential for habitability than we initially thought.

All three of the planets appeared to be good candidates when they were first discovered back in May. They all orbit the same small cool dwarf star, TRAPPIST-1, just 40 light-years away from us. All were approximately Earth-sized, and all fell within the coveted not-too hot/not-too-cold habitable zone capable of supporting life.

In a paper published in Nature, the same researchers have determined that at least two of those planets are terrestrial planets like Earth – with rocky surfaces and small, compact atmospheres — instead of gas giants like Jupiter or Saturn. “These planets are not mini-gas giants, which is a good thing because they wouldn’t be habitable,” lead author Julien de Wit of MIT told Gizmodo. “We ruled out that scenario.” 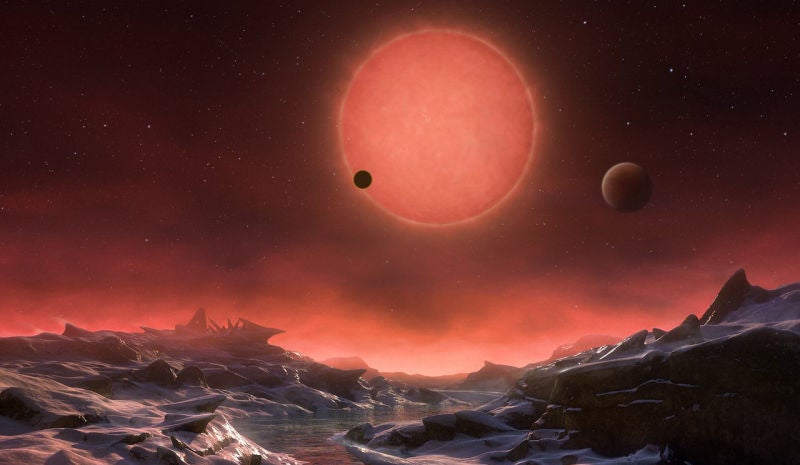 Artist’s conception of the view from one of the planets (Image: Image: ESO/M. Kornmesser)

Gas giants, like Jupiter, have lighter and more diffuse atmospheres that aren’t conducive to habitability. By using slight changes in wavelength, the researchers were able to visualise the planets’ atmospheres and found that the atmospheres were wound fairly tightly around the planet, just like they’d expect from a rocky planet. Now, they want to observe even more transits of the TRAPPIST-1 planets to narrow down more precisely what their atmospheres are like.

The TRAPPIST-1 system was originally found using a prototype robotic telescope placed in Chile. The researchers are curious about whether other relatively small cool dwarf stars could also host similar types of habitable systems. To figure it out, they’re building six additional telescopes — four already in construction and two more that they plan to erect in Morocco and Chile — based on that prototype. Once all six are scanning the skies, we could discover that these potentially habitable planetary systems are much more common than we imagined.