Earlier this year, Japan launched a groundbreaking black-hole-monitoring satellite—only to lose control of it almost immediately under strange circumstances. Now, we finally can see what Hitomi did right before it died.

When JAXA launched Hitomi in February of this year, scientists were almost giddy over the possibilities of what the black hole monitoring satellite might tell us about the mysteries of the universe. It was only up there a month when something went wrong. A series of unfortunate events caused by both human errors and software flaws sent the satellite spinning out of control. Despite attempts to regain that control, Hitomi continued to spin and throw debris into space. Eventually, JAXA declared that the $273 million satellite was beyond recovery.

When Hitomi died, though, researchers also announced that they’d managed to scrape just a little bit of data from the satellite and would be detailing it in upcoming papers. The latest is a new paper in Nature, which shows Hitomi’s final observation. It has some fascinating implications for what we know about the role of black holes in galaxy formation.

Hitomi’s final observations were of the Perseus cluster, a galaxy cluster 240 million light years away from us with a supermassive black hole at its centre. The satellite was able to get this view of the galaxy, as well as to measure its x-ray activity:

Researchers expected to see teeming activity in the centre of the cluster, but Hitomi’s final x-ray observations showed very little.

“The intracluster gas is quieter than expected,” co-author Andrew Fabian of Cambridge University told Gizmodo. “We expected that the level would be higher based on the activity of the central galaxy.”

But the finding isn’t just a surprising oasis of calm in a turbulent galaxy. It also gives us a fascinating glimpse into just what role black holes play in how galaxies do—or don’t—form.

“The surprise is that it turns out that the energy being pumped out of the black hole is being very efficiently absorbed,” co-author Brian McNamara of the University of Waterloo told Gizmodo. “This hot gas that we’re looking at with Hitomi is the stuff of the future, it’s the gas out of which galaxies form. There is much more of this hot gas than there are stars in the galaxy, or there’s more stuff that wasn’t made into galaxies than that was.”

That means that nearby black holes play a big role in the eventual size of a galaxy. “What it shows is that black holes very effectively control the growth rate of galaxies,” said McNamara.

Of course, the find also underscores how little we still know about the role of black holes in galaxy formation—and how many possibilities were closed with the loss of Hitomi.

The loss is even bigger because Hitomi marked what researchers hoped would be the end of a long-standing struggle to finally stick an x-ray microcalorimeter—a device used to take incredibly precise measurements of the energy in x-rays—into space. The findings in today’s study were based on just a very small sample of data researchers were able to get from that microcalorimeter before it was lost, and it already has them speculating over what could have been.

“The measurements on the Perseus Cluster showed the potential of the Hitomi x-ray microcalorimeter to transform our understanding of the velocities of hot gas throughout the Universe,” Fabian said. 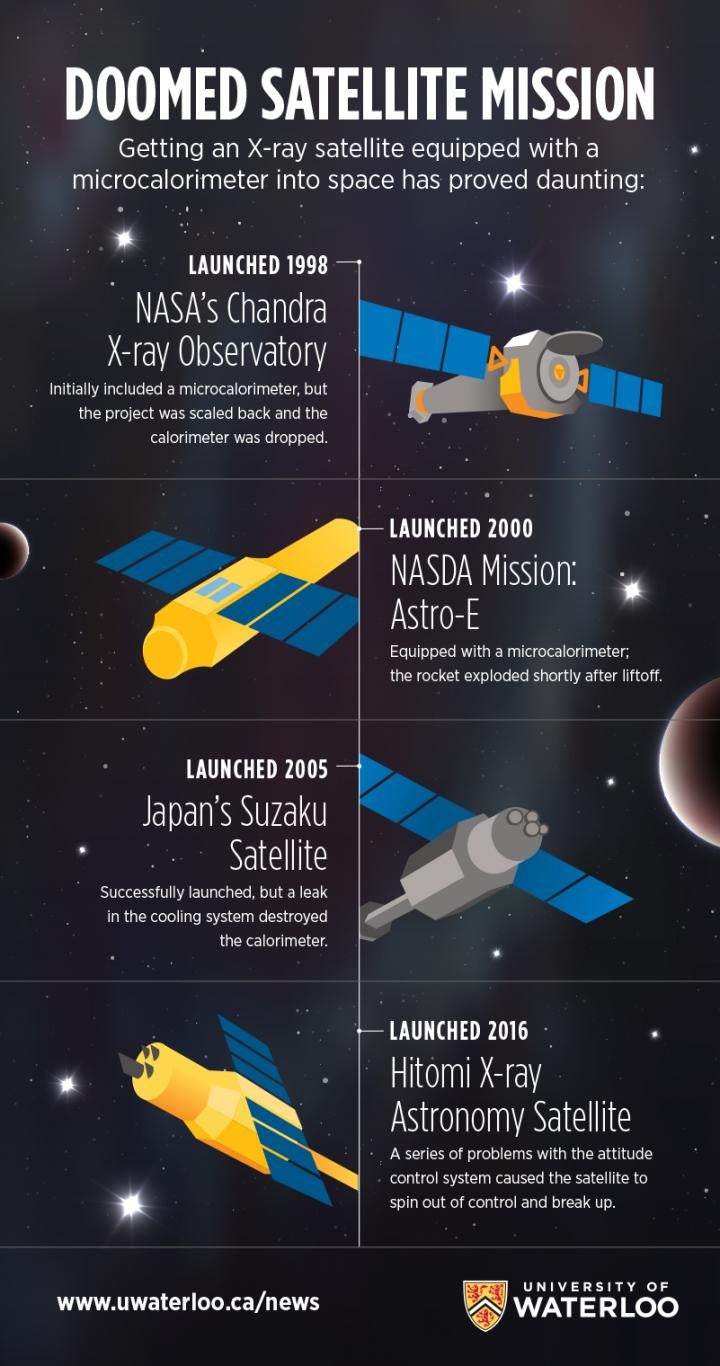 “It’s a huge loss, because just from that glimpse we can see the wonderful science that might have been over the next five years,” said McNamara. “We had a whole landscape of planned observations and that first glimpse we got with the detector shows the richness of what we could find. There were surely discoveries that would have been made when we opened that window.”

Still, even though Hitomi’s microcalorimeter and the observations it would have made are lost, there are other opportunities to still send a working microcalorimeter into space aboard some other upcoming mission, which McNamara is hoping to take advantage of. “There loss, but there’s also hope, we never give up,” he said. “We’re hoping we can still get one there.”

If a microcalorimeter can make it back into space, it could pick up unravelling the mysteries that Hitomi left unsolved—and, perhaps, open the door to some some entirely new mysteries for us to contemplate.