This Planet With Three Suns Shouldn't Even Exist

Three hundred and twenty light years away in the Centaurus constellation sits one of the strangest planets humans have ever laid eyes on. It’s four times as massive as Jupiter and orbits twice as far out as Pluto—around one of its three suns.

Using a new instrument at the European Southern Observatory’s Very Large Telescope, a team of astronomers has spotted a planet in an exotic triple star system; it’s only the second such exoplanet known to science. And unlike the first triple-star exoplanet—which orbits very close to one star and very far from the other two—planet HD 131399Ab is gravitationally influenced by all three suns. Until now, astronomers weren’t sure such a planet could survive.

“I’d venture to say this is the weirdest orbit of any exoplanet we’ve ever found,” Kevin Wagner, an astronomer at the University of Arizona and lead author on the study published in today’s Science, told Gizmodo. “We know of no other planet in a configuration like this.”

Although astronomers have discovered thousands of exoplanets by transit photometry, only a handful of these worlds have been imaged directly. You can think of direct imaging like trying to see a firefly from a lighthouse 1,000 miles away—an extraordinarily difficult thing to do. The only exoplanets we’ve imaged thus far are larger than Jupiter and sit in a comparable or wider orbit, where the glare of the parent star is less intense.

“We know of no other planet in a configuration like this.”

But as our instruments have improved, so has our ability to see a broader diversity of exoplanets, including some in multi-star systems that pose the added challenge of multiple sources of scattered light.

In 2014, the ESO’s Very Large Telescope was outfitted with a new instrument called SPHERE, which features an adaptive optics system for cancelling out the distortion of Earth’s atmosphere, as well as an instrument to block starlight, called a coronagraph. The VLS is one of the most powerful direct imaging tools planet hunters have at their disposal, and it bagged an exotic triple-star exoplanet on its very first observational campaign.

HD 131399A orbits a young A-type star, HD 131399A, taking a casual 550 Earth years to complete a single rotation. Far beyond its orbit, a Sun-like star and a K-dwarf (predictably named B and C) twirl about one another like dumbbells, while also revolving slowly around star A.

“The planet is about a third of a way out [between star A, and the B/C pair],” Wagner said. “All of the stars have a lot of gravitational influence on the planet, meaning it has a very irregular orbit that’s constantly evolving and changing.”

Whether the competing gravitational tug of three stars will cause the planet to be ripped apart or ejected from its overcrowded birthplace remains to be seen. In cosmic terms, HD 131399Ab is an infant, just 16 million years old. But the fact that it has survived this long suggests there could be more worlds like it. Some could even be small, rocky, and habitable. 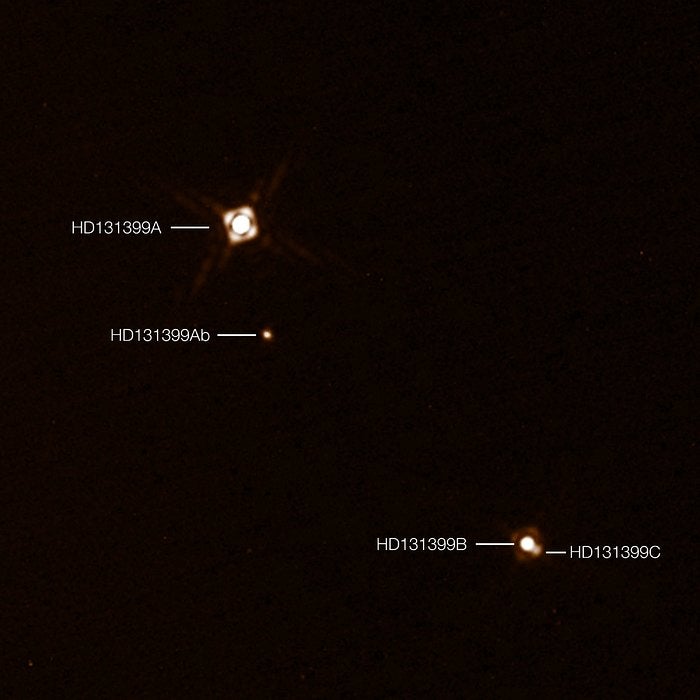 “We thought that [triple star planets] weren’t going to be common, or at least in this extreme configuration, so we hadn’t really looked,” Wagner said. Studying these systems will expand our understanding of the conditions under which planets form and migrate about.

Wagner is continuing to refine HD 131399Ab’s orbit to determine whether the planet will be stable over the long-term. But while its fate and the fate of triple star planets across the universe remains a question mark, that shouldn’t stop us from imagining what life on such a world would be like.

“I like to start thinking about it from when the planet is opposite all three stars,” Wagner said. “When they aren’t eclipsing, you’d see three suns in the sky. As the planet progresses in its orbit, the stars will start to grow apart, to the point where the setting of one coincides with the rising of another.”

In essence you’d have two seasons: one with three sunrises and sunsets every day, and another of perpetual daylight, where a rising star (or stellar pair) is always there to replace a setting one.

Now if that doesn’t make you want to hop in a spaceship and explore the universe, I don’t want to know you.