For several months last autumn, Indonesia choked under a blanket of smog furled by one of the worst fire seasons in its history. But smouldering peatlands didn’t limit their pollution to the island nation: they sent smoke halfway across the world.

“I’d never seen anything quite like this before,” Robert Field of the Goddard Institute for Space Studies told Gizmodo. “It looked more like what you’d expect for a major volcanic eruption.”

Field is lead author on a new analysis of Indonesia’s 2015 fire season, which used data from five Earth-observing satellites to evaluate the total pollution from a spate of peat fires that were at one point emitting more carbon each day than the entire US economy. 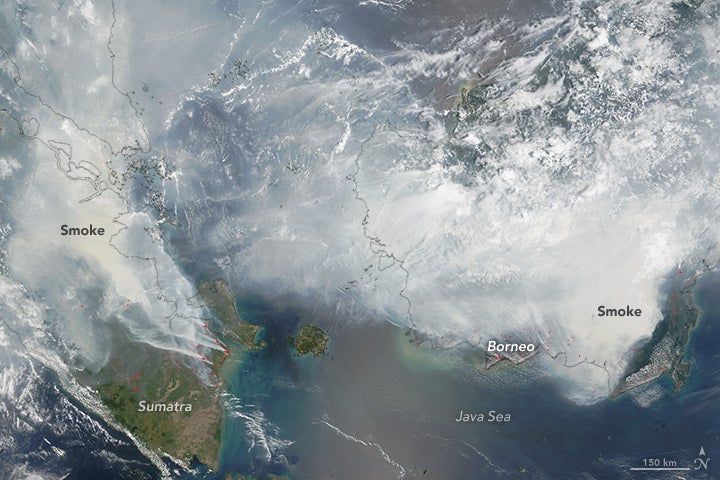 All told, the plumes of soot and carbon monoxide-rich smoke from the record fire season—Indonesia’s worst since 1997—wrapped halfway around the equator, from East Africa to the western Pacific. The smoke persisted for two months, fouling the air across an enormous swath of the Indo-Australian region, including Singapore, western Malaysia and southern Thailand. And the fires yielded more carbon pollution than Japan, the sixth largest CO2 emitter on Earth, did in 2013.

Last year’s Godzilla El Niño is partially to blame. Indonesia sees some of the strongest rainfall deficits of any region on Earth during El Niño years. “It’s an immediate effect like clockwork,” Field said. 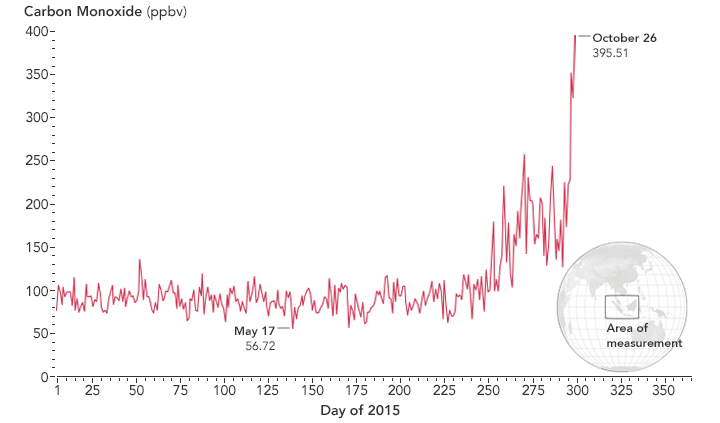 But while El Niño-fuelled droughts set the stage for fires, you still need something or someone to light them. In Indonesia, it’s farmers, who routinely set fire to land to clear out brush and crop residue. Once ignited, those fires creep deep underground, smouldering through thousands of years of carbon-rich peat for months on end. “There’s sort of an inexhaustible supply of fuel,” Field said.

Conditions in Indonesia are much wetter this year, and the fire season is expected to be muted. But a growing number of scientists are concerned about what exceptionally dirty, unnatural peat fire seasons mean for our planet. As another recent study points out, peatlands have the potential to release billions of tons of sequestered carbon skyward. If we want to make a meaningful dent in global carbon pollution, we can’t afford to let them go up in smoke.