Are You Your Microbiome? Ed Yong Explains It All

Writer Ed Yong has been chronicling the science of microbial life for years at such outlets as The New York Times, the Atlantic (where he is now a staff writer), and his blog, Not Exactly Rocket Science (currently hosted by National Geographic). Now he has published his first book, I Contain Multitudes: The Microbes Within Us and a Grander View of Life, in which he explains how bacteria can tune our immune system, change our response to cancer-fighting drugs, and modify our genetic makeup. Gizmodo caught up with Yong to find out more.

Gizmodo: You’ve written about the human micro biome for several years. At what point did you realize this could be a book?

Ed Yong: It always struck me as an area of science that was still in its infancy, and I didn’t want to write a book where I was overselling a science that was still rapidly developing. But then I realised that the human micro biome was just a very small part of a much bigger picture. Bacteria influence the evolution of animals, like the health of corals, or the ability of beetles to bring down forests, or the capacity for insects to feed off plants. That’s when the idea for the book really came into focus. It would be a natural history book, like the David Attenborough documentaries that I so loved when I was growing up, but shot through a very powerful microscope.

You visited quite a few science labs while researching the book.

Yong: I visited something like six different labs in five days, and a smattering of others, too. By its nature, this topic doesn’t lend itself to firsthand visual reporting, because a lot of the things I’m writing about are invisible to the naked eye, and a lot of the work involves sequencing genes and a lot of computational wizardry. So I wanted to see some squid with my own eyes. [I visited] the San Diego Zoo with Rob Knight, a leader in the micro biome field, and watched as he made his rounds around the zoo, collecting swabs from penguins and armadillos.

“Someone who deeply understands the micro biome, they see animal biology very differently.”

And I held a germ-free mouse at Jeff Gordon’s lab at Washington University in St. Louis. They live in these sterile bubbles, with black gloves that protrude into [the habitat]. You stick your hands in the gloves to pick the mice up. It makes you realize just how weird they are. They are like empty silhouettes. They have never seen a bacterium before, they have nothing growing inside them. They’re basically sterile. They look normal, but their immune systems are all messed up. There are all sorts of aspects of their development that don’t tick along in the usual way because they don’t have the right microbes inside them.

I think that’s the essence of the book. It’s about seeing this world that we are very familiar with—animals and zoos—in a different light. This is a book about the hidden aspects to the biology people think they know. But someone who deeply understands the micro biome, they see animal biology very differently. 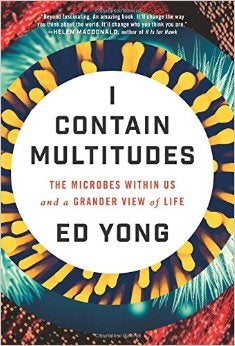 There are a lot of misconceptions about the micro biome in the general public sphere. What’s your pet peeve?

Yong: There is this assumption that any change to the micro biome is necessarily bad. If you compare the micro biomes of people with inflammatory bowel disease, diabetes, or stroke against those of healthy people, you will almost certainly find changes. Likewise when you look at other things that might affect the micro biome like antibiotics or changes in diet.

Those are largely correlations. The majority of studies can’t tell us whether the changes in the micro biome are actually causing poor health, or are simply a consequence of them. There is evidence of a causal role for some conditions, but it is still not clear whether the micro biome is initiating the problems or simply perpetuating them.

These are the questions that I think get swept under the rug, and they are critically important when we think about trying to manipulate the micro biome in order to improve our health. For example, the idea that people from rural or hunter-gatherer populations have more diverse micro biomes than people in the West. There is a natural assumption that we have caused problems in our micro biome through the trappings of our 21st century lives: drugs, antibiotics, bad food, hand sanitisers, or what have you. It’s an intriguing idea, but to date, it’s still not clear whether loss of diversity is a bad thing, or to what extent it accounts for ailments of modern life, like allergies or autoimmune diseases.

So you’re saying it’s a bit premature for us all to be lining up for faecal transplants.

Yong: It depends. Faecal transplants are the best option for treating infections of Clostridium difficile—this very hardy bacteria that causes recurrent bouts of diarrhoea. They have been tested in randomised control trials and they have proven to be much, much better than standard antibiotics. What is much less clear is whether they also work for other conditions. Studies that have looked at faecal transplants for inflammatory bowel disease or metabolic disorders have had less dramatic results. It’s reasonable to think that C. difficile is a special case.

I guess the problem with faecal transplants is that lack of evidence doesn’t stop people from trying them because they are very easy to do. You can do them at home, and there are loads of stories of people who have done so. But there are also stories of parents trying faecal transplants on autistic children. That strikes me as a really bad idea. I understand the strong emotions that fuel choices like that, but these procedures are not without risk.

Did you get your own micro biome tested?

Yong: I did not, actually. I honestly don’t think those tests can tell me anything of use at the moment. A lot of the methodologies are still being worked out. We know that the micro biome varies a lot over the course of a day, depending on what you eat, where you’ve been, what infections you’ve had, or what drugs you’ve taken. It’s this very dynamic entity.

This field is still in its infancy and that means if you looked at someone’s micro biome, even if you had a perfectly accurate readout, so what? I dispute the idea that you could look at that readout, as the evidence currently stands, and tell me I am at risk of disease X, or whether I need to be doing something differently with my diet. The reason to take part in studies like American Gut is to contribute to science. You greatly add to the number of research subjects that will be represented in future studies.

One of the most fascinating aspects of microbial life is how they use something called horizontal gene transfer to pass genes back and forth.

Yong: This is one of my favourite aspects of biology, because it is so bizarre and counterintuitive. We are used to the idea of parents passing genes onto their kids, but in the world of bacteria and other microbes, genes are just commodities that can be traded from one individual to another. When those microbes form partnerships with animals [including humans], they can shunt those genes over to us. In doing so, they can sometimes transfer incredible abilities, like the ability to make antibodies, or break into plants and cause agricultural disease.

And possibly become a Spider-Man?

Yong: Right, one recent version of Spider-Man’s origins is horizontal gene transfer. A little bit of spider DNA fuses with his own genome and then, BOOM—he is crawling up walls and shooting webbing from his wrists. It’s kind of the natural version of genetic modification, a very controversial topic. But here it is happening across the tree of life all the time. It’s yet another way in which microbes can influence our lives.

So is our knowledge of the micro biome rewriting the principles of evolution in any way?

Yong: It’s always fashionable for journalists and some scientists to claim that this upends everything Darwin said and revolutionises our understanding of evolution. But fundamentally this is still Darwinian evolution at its core. It might be faster, and it works in a quantitatively different way, but qualitatively, it’s still the same. What microbes do is allow animals to make use of adaptations that already evolved in bacteria. We either pick up those genes, or we pick up the microbes and form partnerships with those that have abilities that are useful to us. From our point view, that evolution takes place very suddenly, but that’s because a lot of the gradual slow work has already been done by the microbes. It’s still Darwinian evolution at its core, it’s just kind of turbocharged from our perspective.