Facebook unceremoniously fired at least 15 editors from its trending news team on Friday, as Quartz first reported. The decision to eliminate humans came three months after Gizmodo’s reporting revealed the inner workings of the trending news group, including allegations from former curators that their colleagues suppressed conservative news.

Now, as Quartz reported, the trending team will be operated by algorithm, with engineers stepping in to make adjustments. It’s unclear how many engineers will work on the project, but Gizmodo’s reporting earlier this year found that about six engineers wrote and updated the trending news algorithm at that time.

It looks like those engineers have their work cut out for them. This weekend, just two days after Facebook fired its human curators, the company was already facing criticism for the content being displayed in the trending news module—most notably for including a story with no basis in reality.

The words “Megyn Kelly” were trending on Sunday, but when people hovered over the phrase, it revealed a headline alleging that Fox News anchor Megyn Kelly was fired for supporting Hillary Clinton. The story was completely fabricated, and even referred to Megyn Kelly as a “traitor.”

Facebook used to have a system in place to prevent fake news from trending. For one, trending news curators were mandated to give preferential treatment to a list of media outlets such as the New York Times, Variety, and Time. Curators were also told to avoid sites like The Blaze, Breitbart, and World Star Hip Hop. 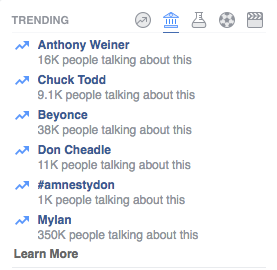 Trending topics no longer shows a summary with each trend. Some trends appear to be in the wrong category such as Beyonce in the politics section. (image: facebook)

Fake news stories aren’t the only problem. The list of trending topics is now a bit of a mess. In the examples shown here (taken from my trending news feed), pop singer Beyonce is trending in the politics section along with actor Don Cheadle. When I click on those items, they show stories about an MTV Video Music Awards performance (for Beyonce) and a tweet directed to Donald Trump (for Don Cheadle).

Facebook curators formerly used an “injection tool” and a “blacklisting” tool, in part to make it appear that its users were talking about important news events on the social network. The reality was much different: Several of the curators who spoke to Gizmodo said celebrities and other frivolous topics were usually much more popular.

Facebook personalises each user’s trending news feed based on “engagement, timelines, Pages you’ve liked and your location,” so it’s impossible to know what everyone is seeing. But if the trends are anything like what I’m seeing, they’re either trivial, untimely, or in the entirely wrong category.

This morning, I saw only one story featured in the science and technology section of trending news. The topic linked to an ABC News report about a tropical depression formed in the Florida Straits. Compared to other technology news forums and sharing sites, the level of engagement (4,800 people) was extremely low, and the section was flat-out missing the biggest science and tech stories of the day. For example, Reddit technology shows several thousands of interactions on its most popular tech articles, which are also timelier and more relevant.

And as a Neiman Lab report noted earlier today, the Facebook trending news module is also highlighting plenty of garbage topics such as “Go Topless Day,” an event that took place on Sunday, and “McChicken,” which linked out to a video of a man having sex with a McDonald’s sandwich.

According to a Pew Research Center study from earlier this year, more than 40 per cent of American adults get their news from Facebook and more than 600 million people see a news story on Facebook every week. Of course, plenty of those news stories pop up on the main newsfeed, not the trending module. It remains to be seen whether Facebook can adequately serve up a worthwhile news experience with its trending module. But if the company can’t even get that part of its news curation under control, you’ve got to ask what else its algorithms are failing to adequately deliver.