How Much Pee Would It Take To Turn An Olympic Pool Green?

One of the frothiest stories to bubble forth from the shit-tastic Rio Olympics this week was the sudden, inexplicable greening of not one, but two Olympic pools.

Actually, there is an explanation: algae. Lots of them. Algae thrive in warm, still water, especially when there’s plenty of sunlight to break down pesky, antimicrobial compounds like chlorine. Alternately, the viridescent hue might have been caused by a simple chemical imbalance. But you know what every closeted 12 year old on the internet assumed it was?

As reputable outlets like The Guardian and New Scientist felt compelled to point out, the greening of the pools was not the result of a mass urination perpetrated by Olympic protestors or, I dunno, drunk gymnasts. But as Twitter polls this week indicate, a sizeable portion of the public remains unconvinced:

No-one will give an explanation for the green diving pool. An official statement from Rio2016 is being prepared!!!

As confusion, fear, and outrage swept the civilised world, my colleagues and I started to wonder: how much pee would it actually take to turn an Olympic pool green? To find out, I spent yesterday afternoon researching the human bladder, colour theory, and basic algebra.

The basic premise of my investigation was simple. As every child  knows, blue + yellow = green. But when you’re trying to figure out how much yellow is needed to get from a particular shade of blue to a particular shade of green, things can get hairy fast. I soon realised I was going to need to make some assumptions.

The first thing I needed was a representative image of Rio’s Olympic pools before and after the Incident. I chose the image below, because it’s relatively well lit, shows us a contaminated and uncontaminated pool in the same frame, and doesn’t have any obvious Instagram filters.

This is a representative image of the colour of Olympic pools in Rio before (left) and after (right) the alleged mass urination. Note that the pool on the left is a diving pool while the pool on the right is a swimming pool, which might affect the colour balance somewhat owing to different depths. For simplicity, we are assuming that the colours of the two pools is one and the same.

Armed with a sample, I downloaded the iOS app True Color, which allows one to determine the precise, mathematical proportions of red, blue, yellow, and white comprising a user-selected region of an image. At just £2.29, it was a steal.

An example of the data provided by True Color.

After randomly selecting a handful of spots in both pools and averaging the results, I arrived at some rough estimates of their colour compositions:

In essence, the diving pool became 3% “more yellow” following the Incident. Now before we figure out how much urine that equates to, we need to make another assumption.

Piss, the way God intended it to be.

This is arguably a much worse assumption than #1, for reasons I’ll discuss momentarily if you haven’t already guessed. But for now, let’s roll with it, because it simplifies the math. Standard Human Urine™ is yellow like a sun-kissed sunflower.

Finally, we must make one last, very important assumption.

For every bladderful of vivd yellow excrement a human empties into the pool, he or she kindly removes a corresponding volume of pool water. In other words, the total volume of the pool does not change. We can safely assume this is a good assumption, because the pool on the right in our representative image is not overflowing with piss-water.

Whew! Now, we can set up a simple system of equations to solve for the amount of urine needed to turn an Olympic pool green.

x = amount of water left in the PUP after draining

y = amount of urine added to the POUP

We can set up two equations:

Now, all we need to do is rearrange terms and solve the system for y:

SOLUTION: It will take a full 78,583 Liters of Standard Human Urine™ to turn that sucker green.

That’s a lot of wee!

According to Continence.org, a healthy adult bladder can hold up to 600 millilitres of urine. Assuming the Incident was perpetrated by a group of standard, full-bladdered adults, and assuming nobody peed twice, you’d need:

That is an awful lot of desperate bathroom-goers—it is close to half the population of Iceland. The mind boggles to imagine that many humans attempting to urinate in a pool over the course of a single night without attracting notice.

What’s more, remember assumption #2, about human urine being bumblebee yellow? Honestly it’s a garbage assumption, especially if the men and women who fouled the pool are well-hydrated athletic types, as one might expect to find at the Olympics. Here is a urine colour chart I found via Google image search: 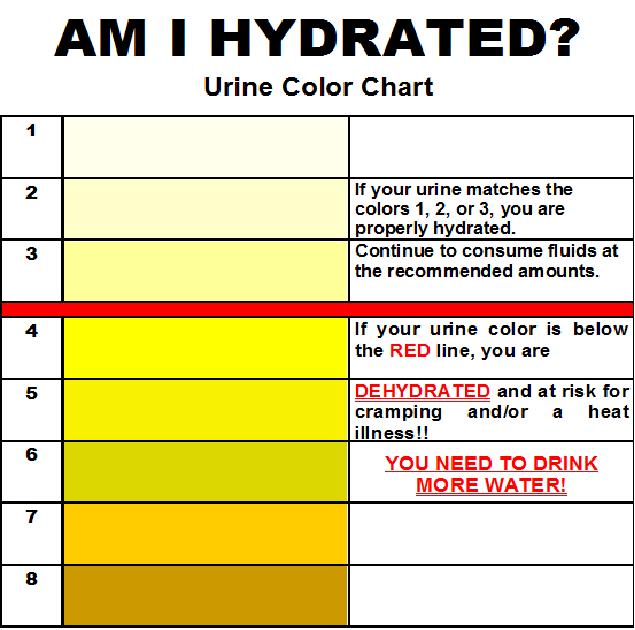 It would seem that standard human urine is more of a pastel colour. If your pee is bright yellow, you my friend are severely dehydrated and possibly in need of medical attention.

What’s the implication? The implication is that 130,972 should be considered a lower estimate for the number of full-bladdered adults needed to turn the pool green. Given this reality, I’m sorry to say it’s very unlikely that even a highly motivated and extremely dehydrated group of disgusting people could have pulled this off without somebody suspecting something was up.

Also, I think we would’ve smelled it.