Instagram announced a brand new feature today, which is really just a recycled version of one of Snapchat’s signature elements: stories.

Instagram’s stories will allow users to share various photos and videos of their day with followers, with the option to add “text and drawing tools”. The content will disappear after 24 hours, but it won’t appear in the poster’s profile grid — it will live above users’ feeds. 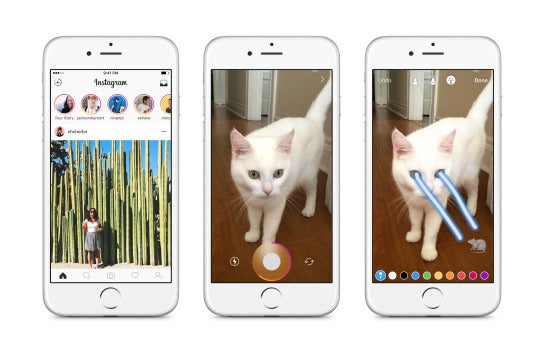 Sound familiar? That’s because it’s almost identical to Snapchat’s Stories feature, which rolled out in... 2013.

If you want to see someone’s story — and stories fall in line with a user’s privacy settings, so if someone’s profile is private, you won’t be able to see them — you can click on their profile photo, which will have a “colorful ring around it” when they’ve added new stuff. You can’t comment publicly, but if you see something interesting — boring brunch photos not withstanding — you can message them privately.

It’s unclear why exactly Instagram is gobbling up Snapchat’s leftover goods in such a cheap, blatant way—why not at least try to change the feature? — but perhaps they’re hoping to lasso in some Youths.

Instagram CEO Kevin Systrom, for his part, argued that it was about “format.

“They deserve all the credit,” he told TechCrunch of Snapchat, but added, “This isn’t about who invented something. This is about a format, and how you take it to a network and put your own spin on it.” Okay then!

In any case, the feature rolls out over the next few weeks, so we’ll be able to compare them better then.