During the Cold War, the US Army studied the feasibility of launching ballistic missiles from within Greenland’s ice sheet. When the project was done, engineers buried biological, chemical, and radioactive waste in the ice thinking it would be preserved for eternity. Shame they didn’t know about global warming.

Called Camp Century, the facility was built by the US Army of Engineers in 1959, and it doubled as a top-secret site to see if it was possible to deploy nukes from the Arctic. Known as “the city under ice”, the subterranean base was built 125 miles (220 km) inland from the Greenland coast. It housed 85 to 200 soldiers and scientists, and even included a portable nuclear reactor

After it was decommissioned in 1969, the Army left virtually everything behind. They figured, not unreasonably, that steadily accumulating snowfall would preserve Camp Century and its contents for centuries, if not longer. A new study published in Geophysical Research Letters suggests this was an imprudent decision, and that the abandoned waste left at the site is now at risk of leaching into the environment. The reason, needless to say, has to do with rising global temperatures and the inexorable melting of the Greenland Ice Sheet.

For the study, a research team led by William Colgan from York University in Toronto took an inventory of the waste still at the site, and ran climate simulations to determine if the waste was at risk of being exposed.

They learned that the waste at the camp covers 136 acres (55 hectares). The site still contains a whopping 53,000 gallons (200,000 litres) of diesel fuel, which is enough for a single car to circle the globe 80 times. Building materials used at the site contain polychlorinated biphenyls (PCBs), which is toxic to human health. Camp Century also contains 63,000 gallons (240,000) of waste water, including sewage and an unknown quantity of low-level radioactive coolant from the nuclear generator.

Existing “business-as-usual” climate projections suggest a rate of ice meltage that could expose these toxic substances within 75 years. But it could happen sooner. “Once the site transitions from net snowfall to net melt, it’s only a matter of time before the wastes melt out; it becomes irreversible,” noted Colgan in a statement. Climate scientist James White from the University of Colorado, who was not involved with the study, said, “This stuff was going to come out anyway, but what climate change did was press the gas pedal to the floor and say, ‘it’s going to come out a lot faster than you thought.’” 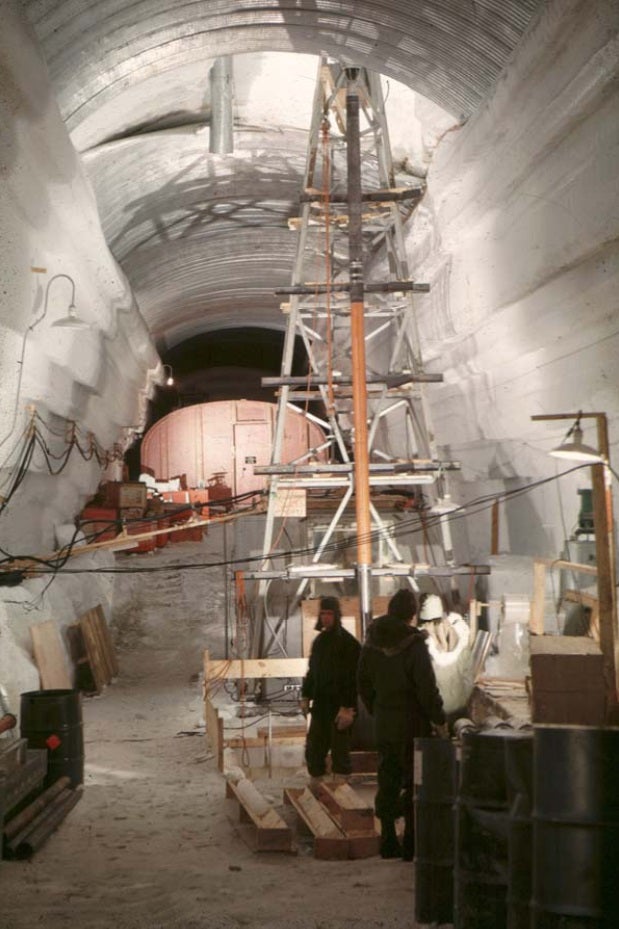 The authors warn that the toxins present a “significant” environmental hazard. Once the ice melts, the pollutants could be transported to the ocean, where they’ll likely endanger sensitive marine ecosystems.

The question now is what to do about the problem. The researchers aren’t advocating an imminent clean-up at Camp Century as it’s still buried deep below the ice. “It really becomes a situation of waiting until the ice sheet has melted down to almost expose the wastes that anyone should advocate for site remediation,” said Colgan.

It’s not immediately clear who is responsible for the clean-up once it’s exposed; international law is vague about who is liable for waste that’s been discarded. As study co-author Jessica Green put it, “[t]he study identifies a big hole in the extant set of laws and rules we have to deal with environmental problems globally.” [Geophysical Research Letters]