The 7 Grossest Things the Internet Has Done to McDonald's Food

By Ryan OConnor on at

McDonald’s food is already pretty unappealing, but as a lifetime of internet consumption has taught me, the moral bottom is limitless. Here are the most repulsive secondary preparations for food ostensibly cooked by a 53-year-old clown.

Running burgers, fries, and soda through a juicer is bad. The dry matter coming out of one end looks like cat shit, and the meat slurry coming out the other looks like, well, regular shit.

Reminder: molten copper is almost 1,100 degrees Celsius. What’s particularly appalling about this isn’t so much the preparation, as how well the burger is weathering it.

This is what you do when your rice cooker has betrayed you in some way. This is the punishment you inflict on a wayward home appliance. There is no only explanation.

Markedly different from a juicer? In theory no, but this nauseating emulsion contains and entire dollar menu= as well as a dash of Michelob Ultra, the beer that says I’ve Given Up On Ever Being Better Than I Am Right Now.

Once again, the preparation isn’t what makes this unwholesome but the sheer scale of caloric intake. Yes, that’s a McRib. Yes, it’s being deep fried. It might be delicious—but at what cost?

If you saw the picture at the top of this post and were totally unable to recognise the horrifying plate of slop as food, let alone McDonald’s, now you know why. Coke on it’s own is able to strip the paint off a car. Add heat, time, and greasy food. Regret everything. 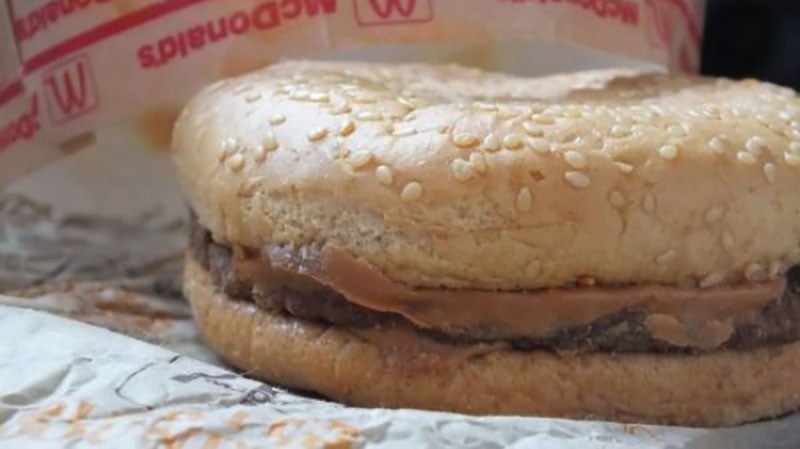 By far one thing that reveals the inner void of McDonald’s food is the steady march of time itself. In 1995, Casey Dean and Edward Nitz bought a single cheeseburger and stashed it away—posting their findings on Imgur. The above burger is, allegedly, 20 years old. Nothing edible should sustain its form so long.