The Mystery About the 'Coffee Ring Effect' Continues

The “coffee ring effect” is that pattern you get when a single liquid evaporates and leaves behind a ring of previously dissolved solids. In the case of coffee, that would be the coffee grounds. A new paper in Physical Review E. demonstrates that we still have a lot to learn about this seemingly simple everyday occurrence.

The more you know about the various forces at play during this process, the better you can predict where those grounds will end up. So physicists engaged n fluid dynamics research are naturally keen to lean more about the coffee ring effect. It doesn’t just appear in coffee. Whiskey will also leave telltale rings, as will any other liquid with tiny particles suspended in it: blood, paint, and ink, for instance. 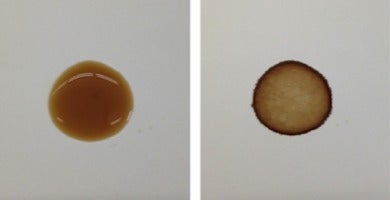 Lehigh University graduate student Baiou Shi accidentally spilled her coffee one morning in the lab, and just as she was about to clean it up, her adviser, Edmund Webb, stopped her: “Don’t do it!” That inspired them to run their own computer simulation of how a drop spreads out on a flat surface.

They didn’t simulate coffee, however, but a drop of lead filled with tiny copper particles on a copper surface, which simplifies the physics just a bit—the better to calculate all the forces involved. And they used surfaces with different crystal structures to get a better idea of how the spreading of the drops can vary, and what impact this has on if and how the particles eventually stick to the surface at the outer edges of the resulting ring.

Shi and Webb’s simulation showed that a very thin film will form on the surface, just ahead of the spreading droplet, and unlike the drop, it doesn’t stop spreading once the dark outer ring has formed. They’re not sure why; more experiments and simulations will no doubt be in order. But if physicists can crack the mystery, they’ll be able to manipulate these kinds of liquids at the nanoscale, opening up a host of potential applications in medicine and high-tech manufacturing. [Physical Review E via Physics Buzz]