The So-Called Alien Megastructure Just Got Even More Mysterious

Last fall, a little-known star called KIC 8462852 became our planetary obsession when astronomers said that its erratic flickering could be the result of an alien megastructure. Further observation of Tabby’s Star yielded no signs of aliens, but the sudden dips in luminosity continue to defy explanation. Now, things just got a bit weirder.

In an unpublished paper posted today to arXiv, Caltech astronomer Ben Montet and Joshua Simon of the Carnegie Institute describe the results of a new photometric analysis of Tabby’s Star, which was first flagged in the Kepler Space Telescope’s database by citizen science astronomers.

By carefully examining all the full-frame images collected during Kepler’s observational campaign, Montet and Simon discovered something astonishing: Not only did the star’s light output occasionally dip by up to 20 per cent, its total stellar flux diminished continuously over the course of four years.

“We spent a long time trying to convince ourselves this wasn’t real. We just weren’t able to.”

For the first 1000 days of Kepler’s campaign, Tabby’s Star decreased in luminosity by approximately 0.34 per cent per year. For the next 200 days, the star dimmed more rapidly, its total stellar flux dropping by 2 per cent before levelling off. Overall, Tabby’s Star faded roughly 3 per cent during the four years that Kepler stared at it—an absolutely enormous, inexplicable amount. The astronomers looked at 500 other stars in the vicinity, and saw nothing else like it.

“The part that really surprised me was just how rapid and non-linear it was,” Montet told Gizmodo. “We spent a long time trying to convince ourselves this wasn’t real. We just weren’t able to.” 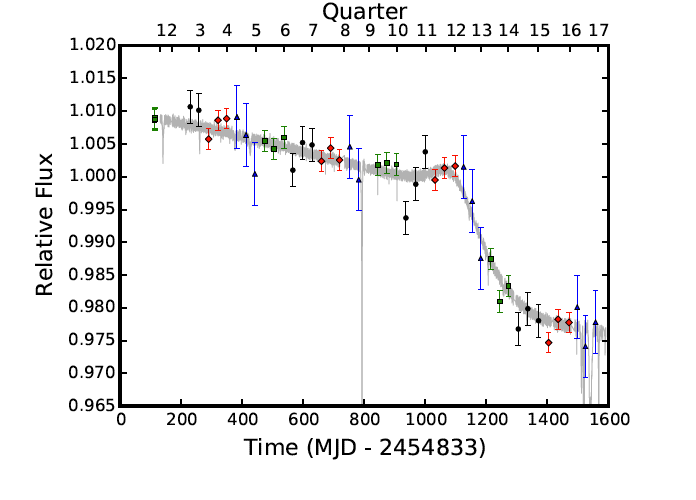 Photometry of KIC8462852 as measured by Kepler data. The analysis reveals a slow but steady decrease in the star’s luminosity for about 1000 days, followed by a period of more rapid decline. Image: Montet & Simon 2016

This isn’t the first time astronomers have claimed that Tabby’s Star is fading. Earlier this year, Bradley Schaefer of Louisiana State University decided to examine the star in old photographic plates of sky dating back to the 19th century. He found that over the past 100 years, the star’s total light output has diminished by a whopping 19 per cent. But shortly after publishing his claims, other astronomers started poking holes in them, saying that the observed dimming was the result of flawed data. Schaefer pushed back, and things got a little bit ugly.

The controversy over Schaefer’s work is what prompted Montet to look for long-term trends in another way. “We realised that in order to settle this, you needed either a long baseline, or high precision data,” Montet said. “Kepler has the latter.” Montet added that the rate of dimming he measured in the Kepler data is about twice what Schaefer found, which “is different, but not necessarily inconsistent.”

“None of the considered phenomena can alone explain the observations.”

Jason Wright, the Penn State astronomer who first suggested that Tabby’s Star might be the site of a vast alien construction project, agreed that the new analysis lends credibility to Schaefer’s claim of century-long dimming. “The new paper states, and I agree, that we don’t have any really good models for this sort of behaviour,” he said. “That’s exciting!”

Keivan Stassun, an astronomer at Vanderbilt who disputed the idea of long-term dimming, said that Tabby’s star continues to defy explanation. “[Montet’s] intriguing new findings suggest that none of the considered phenomena can alone explain the observations,” he told Gizmodo. “In the end, figuring out this puzzle may require accounting for a combination of effects.”

Some of the most credible explanations to date include a swarm of cometary fragments, the effect of a distorted star, or the remnants of a shattered planet. Certain things can explain long-term dimming while others can explain short-term flickering, but as Montet put it, “nothing nicely explains everything.”

What’s clear is that we aren’t going to solve this mystery until we get a better look at this star, which is exactly what Tabby Boyajian—the astronomer who first discovered it—is gearing up to do.

Following a successful crowdfunding campaign to secure time at the the Las Cumbres Observatory Global Telescope Network, Boyajian is going to observe her namesake star for a full year, with the hope of catching it in the act of flickering. If that happens, other telescopes around the world will be alerted and swiftly mobilised. We’ll be able to watch the star wink at us across the entire electromagnetic spectrum, and hopefully, decode its message.