There's Growing Evidence That Venus Was Once Habitable

If you could hop in a time-travelling spacecraft, go back three billion years and land any place in our solar system, where would you want to end up? Earth, with its barren continents and unbreathable atmosphere? Or Mars, a chillier version its big brother? Wait, what about Venus?

Venus has a rep for being a toxic hellscape. But three billion years ago, it may have been the best piece of real estate our solar system had to offer — or at least, a close second to Earth. This hypothesis has been around for years, but it’s gaining traction thanks to climate models developed by researchers at NASA’s Goddard Institute for Space Studies and elsewhere.

Those models show that for two billion years, Venus could have had balmy, Earth-like temperatures and liquid water oceans, despite getting dosed with 40 per cent more solar radiation than Earth is today. But it depends on whether the Venus of bygone days spun as slowly as modern Venus does.

“If Venus was spinning more rapidly, all bets are off,” Michael Way, lead author of a new study that has been submitted for publication in Geophysical Research Letters told Gizmodo. But, under the right conditions, “you get temperatures almost like Earth. That’s remarkable”.

The habitability of Earth and Mars have changed throughout the lifetime of the solar system. Geologic evidence suggests that Mars was much wetter in the distant past, although whether the Red Planet had liquid water oceans or was frozen under a mantle of ice is still a matter of debate. Earth, meanwhile, has swung from hothouse to icehouse and back, all the while accumulating oxygen in its atmosphere and becoming a more favourable place for complex life.

But what about Venus? The past habitability of Earth’s nearest neighbour has received scant attention compared with that of Mars. Our bias may stem from the fact that modern day Venus is so forbidding, with its impenetrably thick atmosphere, toxic thunderclouds, and atmospheric pressure nearly 100 times higher than that of Earth. When a planet turns spacecraft after spacecraft into a puddle of goo within seconds, it’s only natural for people to get frustrated and turn their attention elsewhere.

Still, just because Venus is weird and awful today doesn’t mean it always was. The entire surface was reworked by volcanic activity some 700 million years ago, and we have no idea what Venus looked like before that. But measurements of the hydrogen isotope ratio in Venus’s atmosphere imply that the planet used to have much more water—maybe enough to support oceans.

“If you have a Venus like world around a solar-type star with a slow rotation, that could be a reasonable place for life to exist, especially in the oceans.”

Taking a first stab at the question of whether Venus was once habitable, Way and his colleagues combined a global topographic dataset collected by the Magellan spacecraft with water and solar radiation estimates for past Venus. All of this information was plugged into global climate models, similar to those used to study climate change on Earth today.

The initial results were encouraging. Despite the fact that ancient Venus would have received much more sunlight than modern Earth 2.9 billion years ago, Way’s models predict an average surface temperature of just 11 degrees Celsius (52 degrees Fahrenheit). By 715 million years ago, the surface would have only warmed up four degrees — meaning Venus could have had a temperate climate for at least 2 billion years. 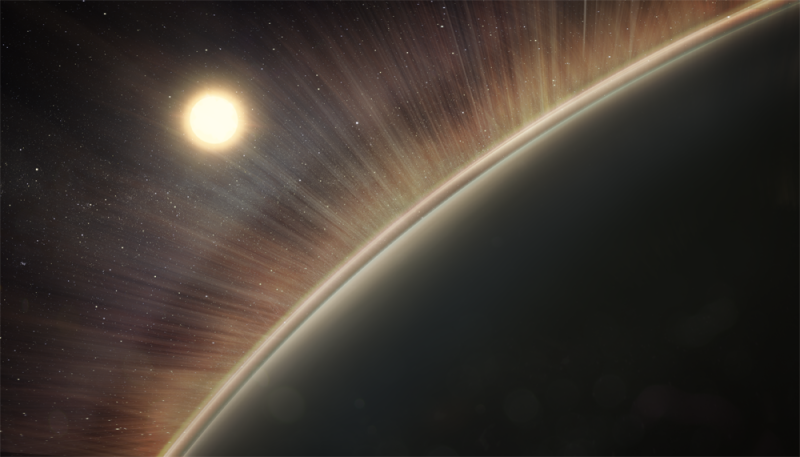 Recent research suggests that a powerful ‘electric wind’ on Venus could have helped strip water vapour out of the planet’s atmosphere. Image: NASA

There is, however, a catch: those numbers are entirely dependent on past Venus having similar topography and orbital characteristics to modern Venus. When Way re-ran his models but gave 2.9 billion year-old Venus a facelift to look like modern day Earth, surface temperatures rose considerably.

“We wanted to see what effect topography might have had on the climate state of this world,” Way said. “Sure enough, it had a big effect.” The reason, he says, probably has to do with changes in the amount of reflective surface on Venus, and shifting atmospheric dynamics.

Another fascinating twist has to do with Venus’s rotation. In his initial models of 2.9 billion year old Venus, Way stuck with a slow, modern-day rotational period of 243 Earth days. But when he spun Venus up to give it a 16 Earth-day period, the planet once again became a pressure cooker.

This has to do with the impact of Venus’s rotational rate on atmospheric circulation patterns called Hadley cells.

“Earth has many [circulation] cells because our planet rotates fast,” Way said. “But if you rotate slowly, you have one in the north and one in the south, period. That changes the atmospheric dynamics of the world by a significant amount.”

Specifically, slow-rotating Venus develops a gigantic cloud right at the sub-solar point, that is, where the sun’s rays are hitting the surface dead on. This basically turns the atmosphere of Venus into a giant solar reflector. When Venus rotates more quickly, this pattern doesn’t form.

While the study doesn’t actually confirm that Venus was once habitable, it does point to a plausible scenario in which Venus could have been. It’s worth noting that a planet’s rotation rate can change dramatically over time — Earth’s rotation is gradually slowing down because of the Moon — and some researchers suspect that Venus spun more quickly in the past. But there’s no easy way for us to find out. We could get indirect evidence by doing population studies on small, rocky exoplanets in Venus-like orbits.

“It could be that life got started on Venus, and then seeded Earth. Or vice-versa.”

And, if Venus was a balmy paradise for billions of years, one has to wonder what sort of apocalypse led to the present-day situation.

“We really need more data before we can say much more”, Way said. But, he added, the study does indicate that worlds in Venus-like orbits should not immediately be deemed uninhabitable.

“In plots of the habitable zone, you typically see Venus on the outside,” he said. “And for modern day Venus, that’s certainly true. But, if you have a Venus-like world around a solar-type star with a slow rotation, it could be quite a reasonable place for life to exist, especially in the oceans.”

A past-habitable Venus also opens up new possibilities about the origin of life on Earth. From meteorites, we know that Earth and Mars were swapping material in the distant past, prompting astrobiologists to wonder whether the Red Planet could have seeded our world with life. But if life was just as likely to emerge on Venus, that’s one more planet to add to mix. Incredibly, we don’t know whether there are any meteorites from Venus here on Earth, because we’ve never been able to analyse a rock on Venus for comparison.

Until then, we can’t deny the possibility that our distant ancestors were actually born on that torrid acid bath next door. “It could be that life got started on Venus, and then seeded Earth,” Way said. “Or vice-versa.”