For the first time, researchers have peered thousands of metres beneath Greenland’s glistening surface to map the bottom of the ice sheet. They were surprised to learn that it’s thawing all over the place.

“It doesn’t mean that all the red is going to slide away into the ocean, but it does mean these areas are more likely to respond.”

It seems counter-intuitive, but the bottom of Greenland’s thick mantle of ice is often tens of degrees warmer than the surface because it receives a small but steady input of geothermal heat from deep within the Earth. For years, scientists have recognised that the ice sheet’s tepid underbelly is probably thawing, and that this could have implications for how quickly the rest of Greenland goes. But until now, that hypothesis has only been backed up with data from a few isolated drill holes.

A team led by glaciologist Joe MacGregor of NASA’s Goddard Space Flight Center has now taken a first stab at figuring out how much of Greenland’s “basal” ice sheet is in fact thawed. Combining computer models of ice sheet physics with radar data from NASA’s Operation IceBridge and imagery from two Earth-observing satellites, MacGregor and his colleagues produced the map shown here, in which red indicates area of basal thaw, while blue indicates where ice is frozen to the land beneath it. 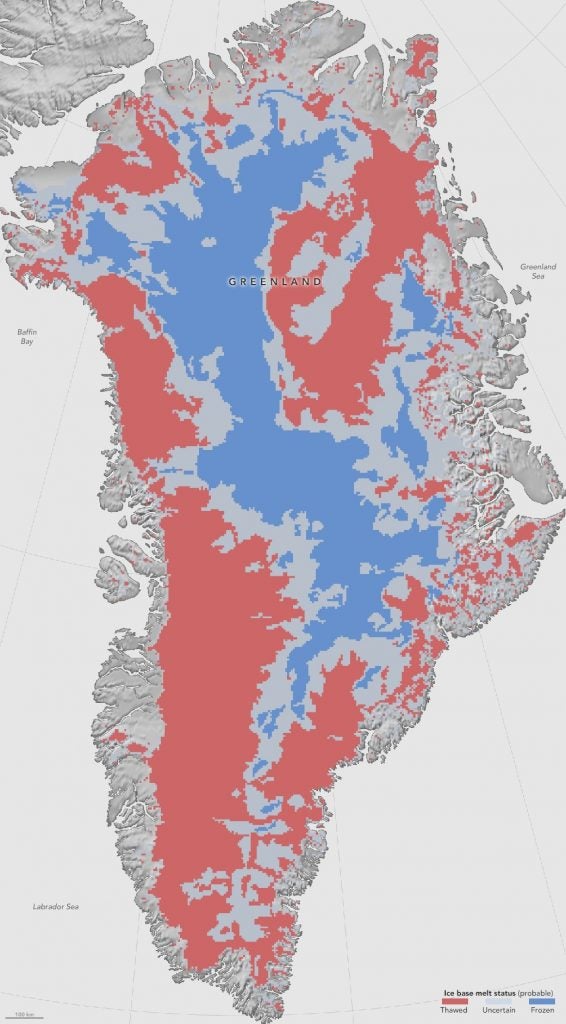 To be clear, this map is only indirectly connected to the rapid melt scientists are now witnessing at Greenland’s tattered shorelines, which is driven heat in the atmosphere and the ocean. “Where the ice [sheet bottom] is thawed is where it can potentially respond more quickly to changes at the edge,” MacGregor told Gizmodo. “It doesn’t mean that all the red is going to slide away into the ocean, but it does mean these areas are more likely to respond.”

The next steps will be to refine this map and incorporate its insights into ice sheet models, in order to improve predictions of what’s going to happen to Greenland over the decades to come. And better predictions are sorely needed, because the amount of sea level rise we’ll see over the century and beyond is directly dependent on what happens to Greenland and Antarctica. Our future is the future of ice, and we’re still just beginning to understand how ice works. [Journal of Geophysical Research]