Today is Earth Overshoot Day—the day when humanity has consumed more natural resources than the planet is able to generate in a single calendar year. Disturbingly, this date is happening earlier with each passing year.

According to the Global Footprint Network, an international think tank concerned with environmental sustainability, Earth Overshoot Day is today, August 8th, 2016. That means we’ve eaten up our annual supply of Earth’s renewable resources—and there’s still a whopping 145 days still left in the year.

“We use more ecological resources and services than nature can regenerate through overfishing, overharvesting forests and emitting more carbon dioxide into the atmosphere than forests can sequester,” notes GFN at its website. 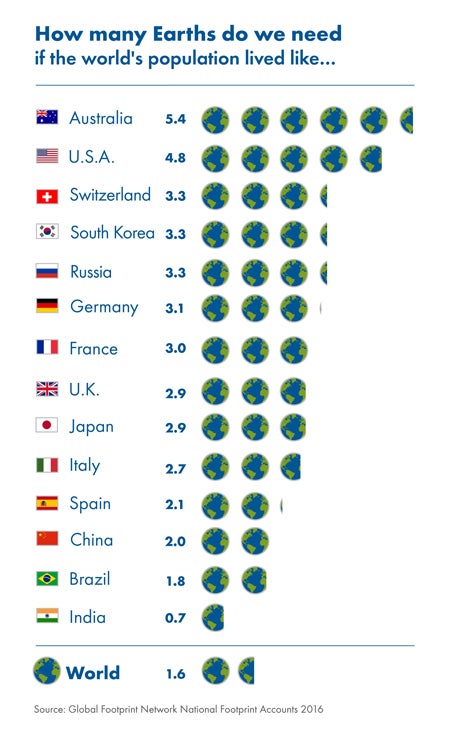 GFN says that carbon emissions are the fastest growing contributor to ecological overshoot, with the carbon footprint now comprising upwards of 60 per cent of our civilisation's demand on nature, or “Ecological Footprint.” In order for us to adhere to the goals set by the Paris climate agreement adopted in December 2015, GFN says we need to come up with a new way of living.

“Such a new way of living comes with many advantages, and making it happen takes effort,” noted Mathis Wackernagel, co-founder and CEO of Global Footprint Network, in a statement. “The good news is that it is possible with current technology, and financially advantageous with overall benefits exceeding costs.”

Wackernagel says such a shift will stimulate emerging sectors like renewable energy, while reducing risks and costs associated with the impacts of climate change. He says the only resource we lack is the political will.

That said, the organisation says some countries are rising to the challenge. Consider Costa Rica’s achievement of generating 97 per cent of its electricity from renewable sources in the first three months of the year. GFN also lauded the UK, Germany, and Portugal for setting new records for renewables, while asking the public to take action to live more sustainable lives. [Global Footprint Network, Earth Overshoot Day]