Dramatic Visualisations Show Just How Quickly the Arctic Is Melting

On September 10th, the Arctic hit its annual summertime ice minimum. According to the National Snow and Ice Data Center, it was the second lowest summertime low since satellite record-keeping began. And as a series of new visualisations show, this trend is not going anywhere.

The Arctic is the fastest-warming region of our planet today, heating up at roughly twice the globally-averaged rate. And nothing illustrates the north pole’s hot flash as poignantly as sea ice, that thick mantle of shiny white stuff that blankets a region of the Arctic the size of the United States and Mexico combined during the winter that shrinks back down in the summer. Thanks to unseasonably warm winters, earlier spring thaws and long, hot summers, Arctic sea ice has been on a downward spiral since at least the ‘90s.

Annual arctic sea ice anomalies since the 1950s. Note that the satellite record did not begin until 1979, with the earlier record reconstructed from operational ice charts and other sources. Image: NASA Earth Observatory

Not only is the average trending downwards, new research shows that ice up north has been doing poorly every single month. When Claire Parkinson and Nicolo DiGirolamo of NASA Goddard ranked 37 years of monthly sea ice extents, they discovered the Arctic had logged 75 monthly record lows since 1979. The number of record highs? Zero.

It’s worth noting that while the Antarctic has been gaining sea ice over the same period—a fact that climate deniers like to jump on, but which scientists think is due to atmospheric oscillations and shifting ocean currents, not some grand climate conspiracy—combining our planet’s two poles still shows a downward trend in sea ice:

A crucial time for tracking sea ice changes is September, with the summertime minimum typically falling in the second or third week of the month. As you can see in the graph below, that annual low has dropped off steeply since the early 2000s.

Here’s another visualisation that I really like: an animated gif that walks us through every year in the satellite record, with earlier sea ice history depicted in greens and blues and more recent history in purples and reds. Straddling the bottom of the graph like an angry pimple is 2012, which saw just 3.39 million square kilometres of of ice in mid-September. That’s 44 percent less than the long-term average.

But even colourful, animated lines that I could watch all day don’t do justice to how much vanishing ice we’re talking about. The chart below shows us the September sea ice extent between 2004 through 2012, with the 1979-2000 median extent overlain in pink. The ice sheet itself is colour-coded according to “concentration anomaly,” cooler colours indicate lower than average ice coverage, while warmer colours indicate higher than average. 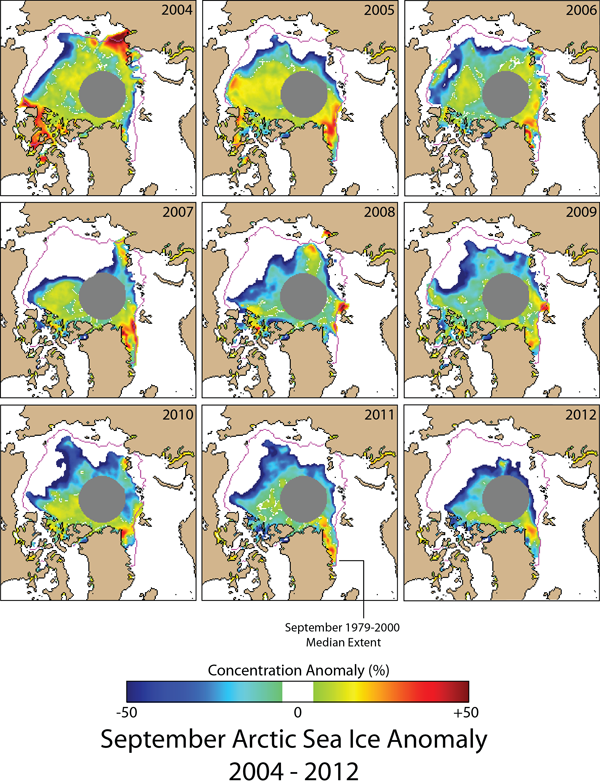 Finally, there’s 2016, which may not have hit an all-time low, but still bagged itself a few records in the sea ice hall fame. Sea ice in the Arctic peaked this March at record low of 14.5 million square kilometres, before melting fast and hard throughout the spring. By early June, it looked like we were on track to reach the lowest ice levels on the books, but a spate of relatively cool and cloudy weather helped slow the melting down during July and August, and so instead, we tied 2007 for second place. 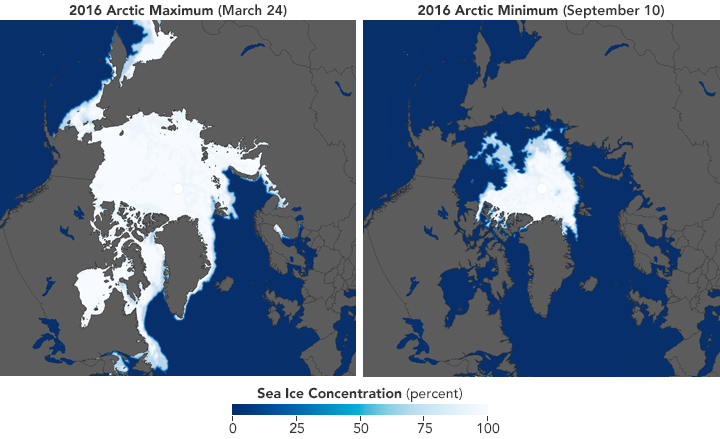 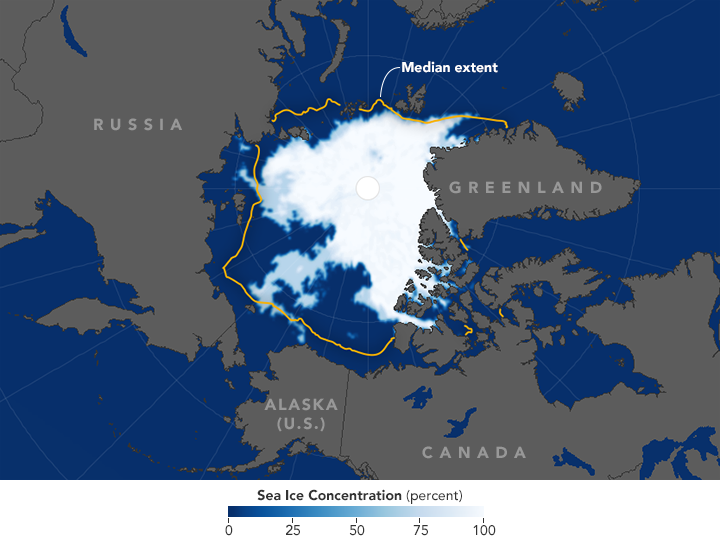 The fact that the Arctic had a fairly cool summer and still hit a near record-low in September “really suggests that in the next few years, with more typical warmer conditions, we will see some very dramatic further losses,” said Ted Scambos, a glaciologist at the NSDIC.

Should that matter to you? Absolutely. Not only are we staring at a clear symptom of our rapidly warming planet, the disappearance of sea ice is itself a climate feedback that causes the Arctic to absorb more heat, warming even faster. That means more melting on the Greenland ice sheet, accelerated sea level rise, and more trouble for low-lying communities and ecosystems around the world.

Tomorrow, dozens of nations are coming together to ratify the Paris Agreement, in the hopes of bringing the landmark climate accord into effect. Anyone who still has doubts that we need to act quickly to bring down global carbon pollution ought to take a good long look at Arctic ice trends. In a few more years, there might not be much left to see. [NASA Earth Observatory, NSDIC]