How the Rosetta Spacecraft Will Crash Onto Comet 67P

In just seven days, the Rosetta spacecraft will smash into Comet 67P. A new visualisation shows how it’ll go down.

This video shows Rosetta’s final two months of trajectories around Comet 67P/Churyumov-Gerasimenko, which started on August 8th and ending on September 29th. The European Space Agency is ending the mission because the comet is now heading away from the sun, and the space probe lacks the energy to keep on going. And by crashing Rosetta in a controlled descent, ESA scientists stand to learn much about the comet and its dynamic surface details. 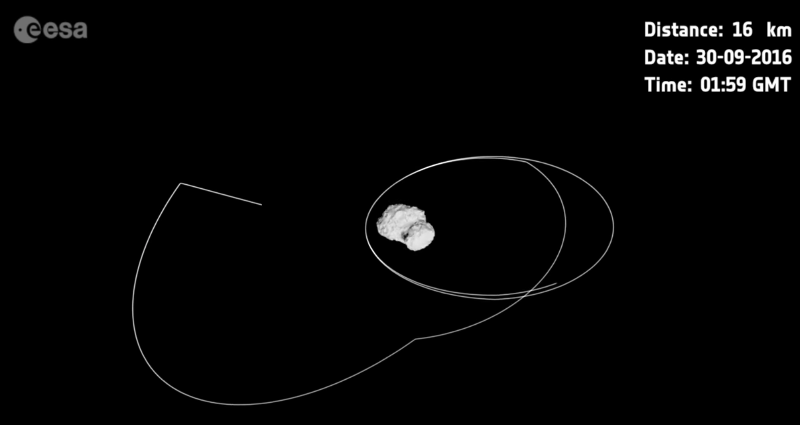 Screengrab showing Rosetta as it makes a bee-line toward Comet 67P. (Image: ESA)

The Rosetta spacecraft arrived at the comet on August 6th, 2014, and it has been spinning around the potato-shaped object ever since, snapping pics and making measurements. On November 12th, 2014, the Philae lander detached from Rosetta, bouncing twice on the surface and eventually becoming wedged into a dark crevice beneath a craggy cliff. But now, after a little over two years, the mission has come to an end.

By instigating a series of complex manoeuvres, mission controllers are inching the probe ever closer to Comet 67P. On September 27th, the space probe will leave its current, flyover orbits and commence a new orbital trajectory that will be used to line up Rosetta for its final descent.

On the evening of September 29th, it’ll manoeuvre onto its final, fateful course, starting with a descent from an altitude of 12 miles (19 km). At that point, having lost all its momentum, it’ll fall straight down without the need for any more external intervention. Rosetta will crash onto a site called Ma’at, which is littered with boulders and deep sinkholes—a perfect final resting place for what was an incredible and exciting mission. [ESA]