Sometimes in life, you get lucky and end up living in a normal ant colony. But sometimes, you find yourself shit out of luck, living out your days in a cold, dark abandoned Soviet bunker.

Such is the case for a “colony” of wood-ants in Western Poland. According to research recently published in the Journal of Hymenoptera Research, using the term “colony” is even a bit of a stretch, because the demonstrated characteristics of the gathering—a lack of offspring, no queens, barely any food—“is a far cry from a fully functional colony.”

The ants were accidentally discovered in 2013 while researchers were busy looking for bats. The colony, the intrepid explorers realised, was actually a kind of ant underworld—it was populated by ants who had fallen through a hole in the middle of another, more normally-functioning colony above. While the ants were able to crawl around the bunker, they weren’t able to escape back up into the hole from which they came.

Down below, in an abandoned chamber of the bunker—originally built to house nuclear weapons—the bizarro ants had constructed an “irregularly shaped” earthen mound. All around the mound, the researchers reported, was a “carpet” of an estimated two million dead ants.

Given the brutal conditions of the bunker—pitch black, freezing cold, isolated from the natural world—it’s not surprising that a bunch of these poor suckers didn’t make it. The researchers haven’t yet managed to pinpoint a definite food source for the ants, though they hypothesised that bat poo and small mites might help. Either way, it’s not nearly enough to sustain an entire colony—but that’s where the lucky ants above come in.

“The continued survival of the ‘colony’ through the years is dependent on new workers falling in through the ventilation pipe,” researchers wrote. “The supplement of workers more than compensates for the mortality rate of workers such that through the years the bunker workforce has grown to the level of big, mature natural colonies.” 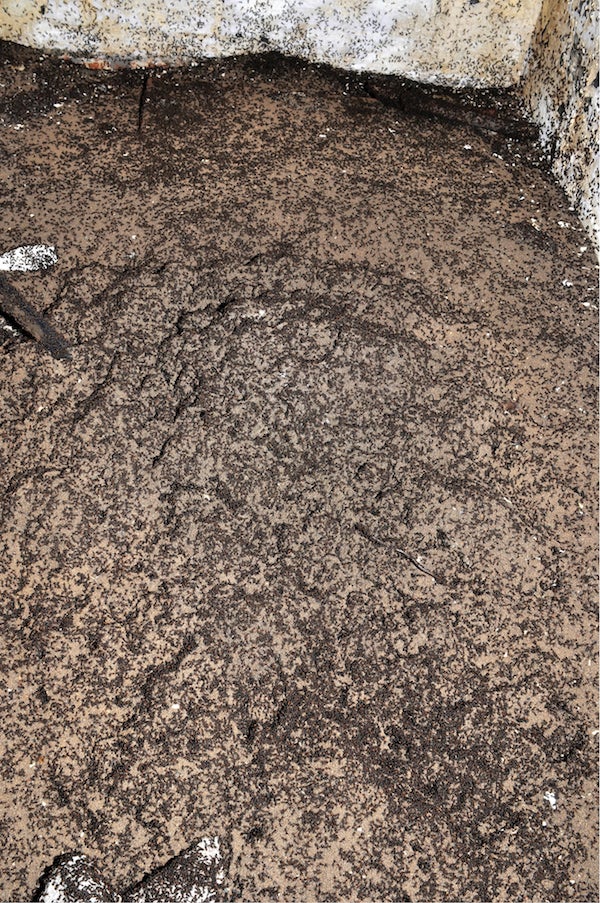 An ant “cemetery” is seen against the wall of the bunker. (Image: Wojciech Stephan)

“The wood-ant ‘colony’ described here ... is an example of survival of a large amount of workers trapped within a hostile environment,” the researchers conclude.

The whole thing sounds like the skin-crawling plot to a horror movie, but if and when the apocalypse ever comes, you can bet they’ll manage to survive for a little while. [Popular Mechanics]