Now We Know How Beer Foam Stops All That Sloshing

There’s something especially satisfying about a nice cold brew with a thick head of foam. But that foam also serves a purpose: not only does it enhance the flavour of your beer, it also helps dampen the inevitable sloshing when you and your pals clink glasses. Scientists now think they’ve pd out why.

From a physics standpoint, sloshing is basically waves of a liquid oscillating back and forth. Over time the energy of those waves slowly dissipates, and they get smaller and smaller. Theory predicts that this should happen exponentially. In other words, the waves will get smaller and smaller, but never entirely vanish, so the sloshing goes on forever.

That’s not what happens in the real world, of course: eventually, the slosh will stop. Clearly, some other forces come into play, but physicists weren’t sure what those might be—until now.

The culprit is something called capillary action, according to a new paper in Physics of Fluids. Like Van de Waals forces—the reason geckos’ sticky feet let them scale vertical walls—capillary action stems from intramolecular forces, in this case between a liquid and its surrounding solid surfaces. 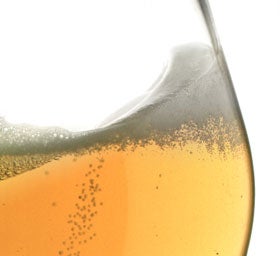 Capillary action is the same phenomenon that causes a sponge or Bounty paper towel to soak up liquids from a surface, enables certain insects to walk on water, and plants to suck up water from their roots. You know when a drop of water forms on the spigot of your tap and just hangs there until you touch it? Capillary forces hold it there.

You can witness capillary action for yourself. Just take a simple glass straw—i.e., a tube that is open at either end—and place one end in a glass of water. The water will rise for a bit, thanks to surface tension, but at some point it will stop. This happens when the mass of the liquid becomes large enough for gravity to overcome the intramolecular forces.

“Those capillary forces are small, but they’re very important as soon as the sizes or motions get small,” co-author Pierre-Thomas Brun, a mathematician at MIT, said in a statement.

That makes detecting capillary forces a bit challenging from an experimental standpoint. So Brun and his colleagues turned to liquids with foams, because the foams amplify those tiny effects. They filled a Plexiglass cylinder mounted on an aluminium plate with water and then injected commercial liquid hand soap to create a thick foam at the top. Then they tilted the container this way and that, measuring the sloshing that ensued.

The team concluded that capillary effects from the soap suds creates tiny pressure gradients near corner walls. These produce tiny motions that counter and reduce the sloshing. And the slower the sloshing, the faster it dissipated. They think that this happens in non-sudsy liquids too—it’s just much harder to detect.

Controlling sloshing liquids is actually pretty important, especially if the liquid in question happens to be the liquid fuel used in rockets or oil in the hold of a cargo ship. In both cases, too much sloshing could prove disastrous. But sloshing your beer is pretty harmless, save for the potential damage to your dignity should you get foam on your nose, or beer down your shirt. [Physics of Fluids]