It’s been an open secret for some time that Palmer Luckey, the 24-year-old founder of VR company Oculus Rift and heir apparent to the future of gaming, is a strange guy — the type who argues with his customers on Reddit and casually cosplays as My Little Pony characters. Turns out, he also appears to be an active supporter of Donald Trump and the alt-right, and in a long-term relationship with an avid Gamergater.

The Daily Beast broke the news late last night that Luckey — who sold his company to Facebook for $2 billion in 2014 — is funding a pro-Trump group called Nimble America dedicated to trolling. But that’s not the entire story. Though he takes care not to post anything blatantly trolly from his main accounts, the tweets Luckey favourites show a pattern that appears to indicate his support of both Trump and Gamergaters. Motherboard first reported on Luckey’s Trump favourites and allegiance to 4chan on Friday morning. In addition to a number of tweets from Trump himself, Luckey’s also favourited this Trump appearance, which features the “deplorables” meme created by the alt-right.

Here's video of Trump walking out in Miami to "Do You Hear the People Sing" from Les Mis: pic.twitter.com/iuLNSaLB6K

He’s also faved tweets mocking “SJWs” or Social Justice Warriors — a concept encompassing a sort of liberal boogeyman for members of the alt-right. For the alt-right, “censorship” is everything up to and including criticism of outright bigotry, and SJWs are painted as ineffectual proponents of everything from racial tolerance to nanny state politics.

SJW's in a nutshell pic.twitter.com/STwho2jDsg

As Motherboard notes, only so much can be read into passive Twitter endorsement, though in aggregate the favourites suggest quite a lot about Luckey’s beliefs.

Luckey is also in a long-term relationship with Nicole Edelmann, aka Nikki Moxxi, a cosplayer, vocal member of the GamerGate movement, and active Trump supporter.

Edelmann, who according to a New York Observer article from 2015, lives with and has been dating Luckey for approximately five years (as recently as this past spring, Luckey and Edelmann appeared to be in a relationship on social media). Edelmann’s social media accounts are rife with GamerGate support posts. She frequently shit-talks feminist Anita Sarkeesian, mocks “SJWs”, and tweets pictures of herself at Trump events. She’s cosplayed as GamerGater mascot Vivian James, and been photographed at GamerGate meet-ups around San Francisco.

One tweet of Edelmann’s repurposes KC Green’s “this is fine” comic to express her beliefs on immigration. At the time the tweet was posted in March, it was faved by Luckey.

More of Edelmann’s social media posts are below. Luckey himself doesn’t tweet in support of GamerGate, but he has faved Edelmann’s comments (both on GamerGate and more broadly) going back at least several months. As of today, Edelman has set her Twitter account as protected.

We’ve reached out to Luckey, Facebook, and Edelmann, and will update this story if we hear back. 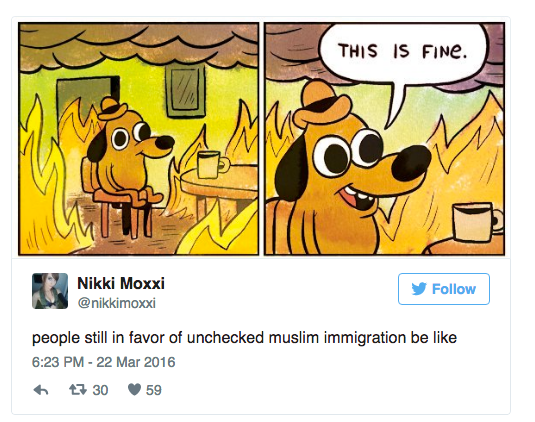 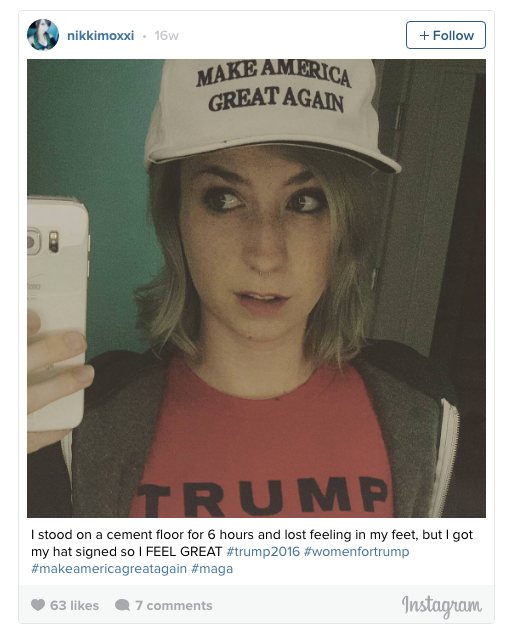