Scientists Have Bred Live Mice with No Need for Fertilised Eggs

For the first time ever, scientists have produced live mice without a fertilised egg cell. The potentially revolutionary technique could one day allow gay men to produce biological offspring, or—even more radically—allow both men and women to self-fertilise.

Researchers from the University of Bath injected sperm directly into a modified, inactive mouse embryo. The resulting mice appeared to be normal, and were even able to reproduce. The new study, published in Nature Communications, challenges nearly two centuries of conventional wisdom, showing that it’s possible to produce healthy mammalian offspring without first having to fertilise an egg.

In 1827, biologist Karl Ernst Ritter von Baer became the first scientist to knowingly observe mammalian eggs (in dogs), concluding that all animals develop from eggs. This has largely informed our understanding of reproduction ever since, and until now, no one has been able to show that any cell other than an egg cell can combine with sperm to produce offspring.

It’s not as if scientists haven’t tried. Previously, researchers have “tricked” eggs into developing into an embryo without fertilisation, but the resulting embryos (known as parthenogenetic embryos) died after just a few days.

“In some vertebrate species, like geckos for example, parthenogenetic embryos can develop fully to produce healthy live young, but there are no examples of parthenogenetic mammals known to science,” lead author Tony Perry told Gizmodo. “Instead, development peters out after a few days.”

Perry says this has a lot to do with the need for two distinct sets of genomes—one from the mother and one from the father—which, for mammals, is essential to get the right balance of gene expression.

Basically, mammalian sperm can only transform into a mature sperm cell capable of dividing and producing to form a complex organism within an egg—or so we thought. That’s why this new study is so significant. The Bath researchers have shown that a non-egg cell can kickstart this process and completely “reprogram” a sperm cell, resulting in live birth.

Left: Diagram showing sperm injection into a one-cell embryo. Center: DNA of sperm (stained in blue) being injected into a one-cell mouse embryo. Right: Some of the resulting 2-cell embryo cells have a sperm-derived genome (red) and an egg-derived one (yellow), which can develop to form offspring. (Image: Toru Suzuki et al., 2016/Nature Communications)

Perry and his colleagues exposed mouse eggs to a chemical bath containing a salt called strontium chloride (SrCl2). As previous research has shown, this compound prevents the parthenogenetic embryos from going into a state of arrest. “Essentially, for the egg to be ‘tricked’ into initiating parthenogenetic development, one has to remove the activity that keeps it arrested in the meiotic cell cycle, and that, in effect, is what the SrCl2 does,” explained Perry. (By meiotic cell cycle, Perry is referring to the stage in reproduction when a “mother” cell starts to divide into “daughter” cells, resulting in reproductive cells, namely sperm and eggs.)

Next, the researchers injected sperm nuclei into these chemically modified mouse embryos, kickstarting the reprogramming process. The resulting embryos were then implanted into surrogate mothers. 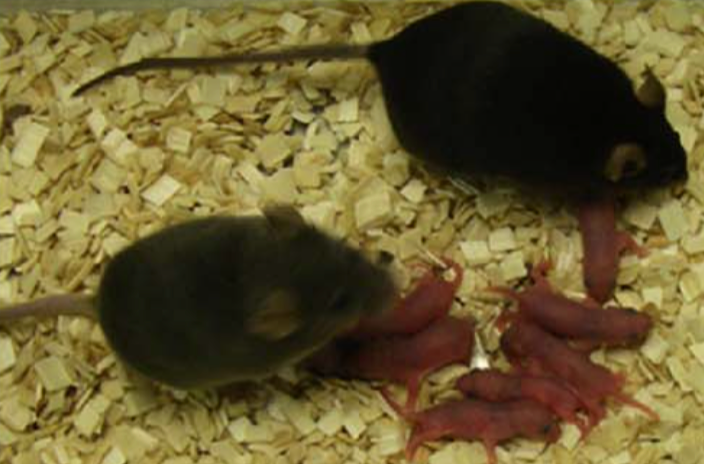 A pair of mice produced without the benefit of an egg cell, along with their offspring. (Image: Toru Suzuki et al., 2016/Nature Communications)

“As far as we can tell, the [resulting] baby mice were normal and healthy,” said Perry. “We checked how long they lived, and their life expectancies were similar—in some cases longer—to those of controls. We found that the mice reproduced efficiently...and had similarly healthy offspring.”

The researchers aren’t entirely sure how the sperm genome was reprogrammed, but preliminary results suggest a different route than what occurs during conventional fertilisation. Future research will be needed to fill in these gaps.

There’s no evidence to suggest the same thing applies to human embryos, but it’s very likely. “Yes, the cells are special—a parthenogenote and a sperm—but imagine if any mitotic cell could reprogram a sperm in the same way,” Perry said. “Then there would be no need for eggs.”

Clearly, many technical and ethical hurdles will have to be sorted out if this is to ever to be used to enable gay men to reproduce (with the help of surrogate mothers), or men and women to self-fertilise. Until then, it could be used to treat infertility and other reproductive issues. This process could even apply to conservation efforts and the assisted reproduction of endangered species.

More philosophically, this research further teases our notions as to when life begins, and how it’s defined. Some individuals believe that life begins at the union of sperm and egg, but this newly developed process would seem to violate that sensibility.