We Now Know What Caused the Weird Erruptions Rosetta's Comet

Last summer, something strange happened on Rosetta’s comet. After a period of calm, the comet began erupting, throwing huge jets of comet dust into space before abruptly stopping. Now, we finally know what happened.

Rosetta is currently heading into a death spiral that will wrap up next week when it slams into the comet it has been orbiting. As it nears the end, ESA researchers are trying to tie up the loose ends of what they’ve learned from their trip to the comet. One of the big outstanding questions was what happened during the comet’s strange summer of 2015.

Last summer, there was a near constant stream of outbursts, with jets of between 60 to 260 tonnes of comet dust erupting from the comet at least 34 times over three months. Although researchers could see the jets pretty clearly it wasn’t clear what was going on. A new paper out today in Monthly Notices of the Royal Astronomical Society tackles that mystery—and traces the answer right up to the sun.

Researchers mapped each outburst that you see pictured above onto a 3-D topographic map of the comet’s surface. When they had completed their map, they found something odd: Almost every outburst occurred on the edge between one geographic feature and another. 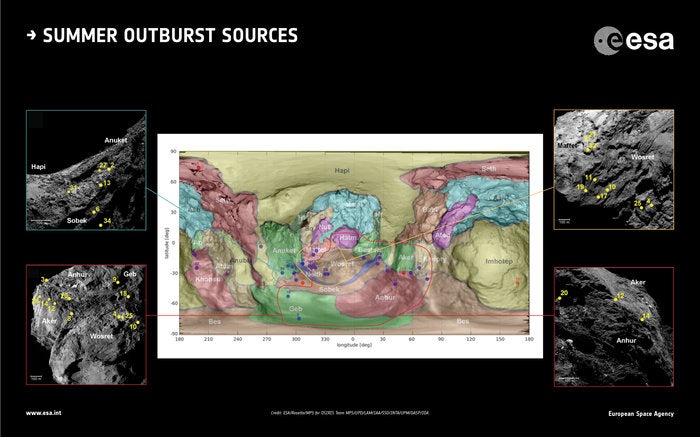 The timing of the outbursts was also unusual in that they tended to happen in the morning, after the sun had began to shine on its surface. The summer of 2015 also happened to be the closest approach the comet made to the sun. By combining all three of these facts, researchers were able to determine that, as the sun heated up the comet after the long cold nights, the heat caused the comet’s volatile terrain to suddenly fracture and vaporise.

Because the comet was closer to the sun that summer, we saw it happen more frequently. But even today, we still see occasional jet outbursts from Rosetta’s comet. Now, in Rosetta’s final days, we finally know what’s behind them.