A Truly Unusual Iceberg Ripped Apart From a Melting Glacier

This past summer, a massive chunk of ice slipped away from a glacier in British Columbia, but no one was there to notice. Using satellite images, a scientist from NASA has now spotted the unusually large iceberg—and he suspects it’s the largest ever seen in North America.

Glaciologist Mauri Pelto noticed the iceberg while analysing space-based photos of Porcupine Glacier in northern British Columbia. In late August 2016, an iceberg detached itself from the glacier and drifted into a lake. Pelto says “it’s the biggest calving event in North America” that he has ever seen (calving is when a glacier or iceberg splits and sheds smaller pieces of ice). 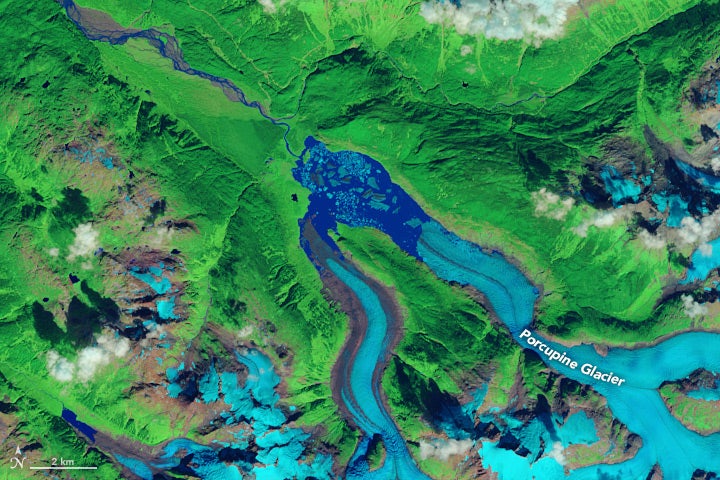 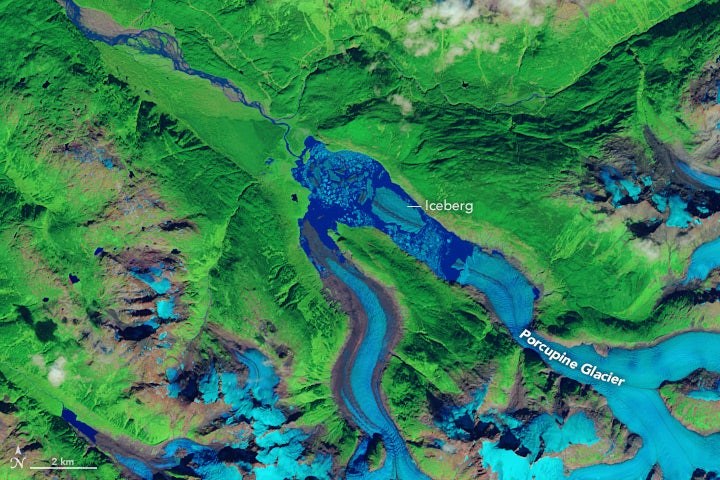 Images taken by the Landsat 8 satellite on August 28 reveal a 0.7 square mile (1.2 square kilometre) iceberg floating northwest of the Porcupine Glacier. A second image shows the glacier before it broke apart. The false-colour images are shown in a short infrared band to accentuate the various geological features, such as ice, snow, and water.

Speaking to The Globe and Mail, Pelto said he doesn’t “want to jump up and down and say it’s the absolute biggest,” but he says it’s the largest iceberg he’s ever seen in North America. The massive chunk of ice dwarfs other recent births, including large calving events in Alaska in 2009 and 2010.

As glacial ice thins, it melts from above and below, becoming more susceptible to rifts; eventually icebergs break off along those cracks. In the case of Porcupine, the iceberg broke off from a floating “ice tongue.” Such ice formations float on a small amount of water, lacking the structural support of a grounded terminus tongue, which is held up by the earth and rock on the seafloor or riverbed beneath it.

From here, the iceberg will continue to melt and produce its own icebergs until the whole thing disappears into the lake. The Porcupine Glacier itself, now much smaller, will continue to evolve as temperatures fluctuate.

Large calving events like this one are unusual for North America, but as Pelto pointed out, they’re starting to happen more frequently (thanks global warming!). Large calving events are also being documented in Antarctica, including a 20-mile-long (33 km) glacier that broke loose from an Antarctic ice sheet in 2013. Sadly, it appears our world is quickly melting. [Globe and Mail, NASA Earth Observatory]